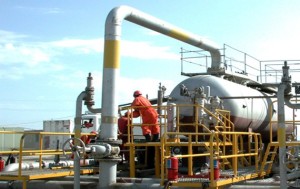 Riyadh has been signaled out by the International Monetary Fund (IMF) after consultations about the impact the low oil prices could have on its coffers, especially that almost half of the kingdom’s budget expenses are allocated to salaries, wages and allowances.

Subsidies also take up a huge chunk of the expenses.

The accession of King Salman to the throne in January was followed by an order to give a bonus salary increment in what many described as a goodwill gesture despite the lower oil income. Oil provides around 90% of the country’s revenue.

Oil prices have been falling since last year raising concerns among economies heavily dependent on the commodity, like Saudi Arabia where 90% of revenues are oil-generated.

The head of the IMF delegation, Tim Callen, said Saudi Arabia could still resist the low oil prices for several years because of its reserves and very low public debt but economic reforms should be made to review spending.

Direct and indirect energy subsidies are estimated to cost at least $30 billion per annum. Callen thinks that higher energy prices will be beneficial at the fiscal level and also at the level of reducing energy consumption.

Analysts know that increasing oil prices is a sensitive issue because Saudis consider cheap fuel as one of their rights as citizens since their country is the world’s major producer.

Saudi Arabia is against cutting production as a means to increase oil prices.