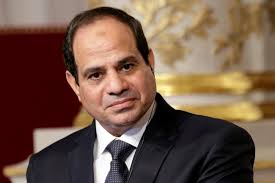 The Middle East Office of the UN Organization for Arts (UNARTS) announced on Wednesday it has selected Egyptian President al-Sissi as a nominee for the 2015 Nobel Peace Prize for his campaign for peace and fight against terrorism.

The nomination was submitted to the Norwegian Nobel Peace Prize committee in Stockholm, UNARTS head office in New York and other UNARTS’s regional offices across the globe, according to Director of the UNARTS in Africa and Middle East, Nabil Rizk.

“Based on his insight on best ways to fight terrorism globally, his concern for humanitarian issues including supporting special-needs people and fighting corruption, President Sisi is a well-deserved nominee for the 2015 Nobel Peace Prize,” said the UNARTS office in a statement.

The office argued that al-Sissi’s nomination comes as “he has been battling terrorism and combating the threat of violence in the region by changing the ideology of extremists and uprooting every idea leading to sectarian strife.”

Al-Sissi, former army-general rose to power after toppling Islamist President Mohamed Morsi in 2013. He won subsequent Presidential elections in 2014. He has been facing harsh opposition from Islamists who have been staging terrorist attacks against police and security forces in retaliation against the removal of Morsi.

If he wins, he will become the second Egyptian President to win the peace award after Egypt’s former President Anwar al-Sadat who had shared the Noble Peace Prize with Prime Minister of Israel Menachem Begin in 1978 shortly after the signing of the Camp David peace treaty in September 1978.

The Nobel Peace Prize Committee has so far received 276 candidacies.