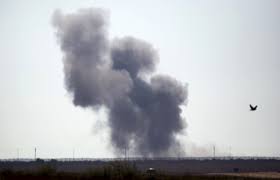 Washington announced Thursday 6 international peacekeepers including 4 Americans had been injured Thursday in two IEDs explosions in North Sinai near Egypt’s border with Israel.

Four Americans and Multinational Force and Observers (MFO) peacekeepers were reported injured by the US Defence Department which did not disclose the names of the injured nor indicated the author of the explosion.

“We are aware that four US and two Multinational Force and Observers (MFO) peacekeepers were injured today in two IED explosions in northeast Sinai,” Defence Department spokesman Captain Jeff Davis said in a statement.

Davis comments were tallied by Major Roger Cabiness who told Reuters that the four Americans were struck by the second blast as they were en route to help the soldiers hurt first. Cabiness added that about 650 American soldiers are stationed in the North Sinai region part of the international forces.

Captain Davis further indicated that the lives of the injured soldiers are out of danger and the victims had been air-lifted for treatment in a hospital.

MFO are stationed in North Sinai in the framework of the 1979 peace treaty between Egypt and Israel.

David went on saying that Washington will remain committed to the role played by the multinational troops and observers “supporting the treaty of peace between Israel and Egypt.”