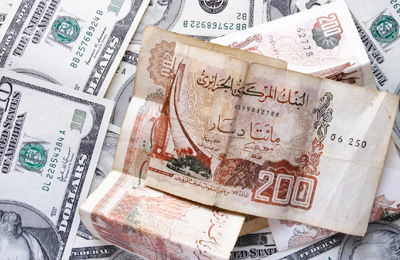 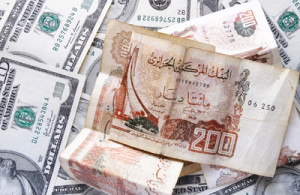 Algerian dinar currency has slumped against the U.S. dollar and the Euro, hitting the bottom due to the fall by 50 pc in the oil revenues, triggering international concerns over the financial & political stability of the North African country.

Algerian people have already started feeling the impact of the depreciation of the dinar, while foreign products have become increasingly out of reach and rare commodities.

The Algerian Central Bank hopes that a depreciated dinar will reduce imports which are expected to reach $57.3 billion in 2015 and boost exports to balance its books.

But financial experts warned that a weak dinar risks unleashing inflation in the North African country, where the government weathered the Arab Spring popular uprising by beefing up subsidies and offering free loans to young people, social housing and public pay increases.

Annual inflation soared to 4.5 percent in April from 4.1 percent in March, according to official figures. The International Monetary Fund (IMF) has called on the Algerian government to reduce public spending. Basic food items and petrol are heavily subsidized in the OPEC member country.

The Algerian authorities have urged people to buy and consume Algerian products. They were forced to freeze a series of development programs to cope with fallout of dropping oil and gas exports, which make 98 percent of the country’s revenues.

Algerian oil and gas sales are expected to bring in $34 billion this year, down from $68 billion in 2014. The north African country recorded a trade deficit of $6.3 billion for the first five months of 2015, compared with a $3.44 billion surplus a year earlier, pushing down the coverage of imports by exports to 71 percent, from 114 percent in the first five months of 2014.

According to some experts, the country may have still some financial cushion to fend off a short term crisis, but warned that if oil prices continue to fall, then the country’s financial and political stability will be greatly undermined, pitching it into unchartered territory.