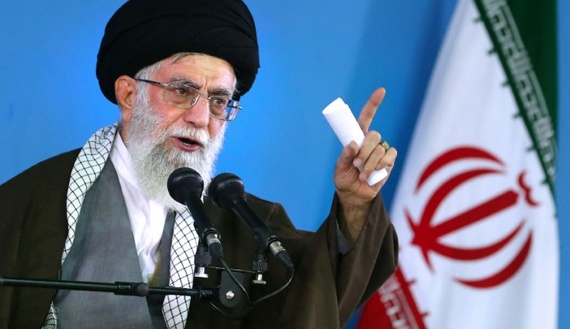 Iran’s Supreme Leader Ayatollah Ali Khamenei Monday indicated that the fate of the historic Vienna pact was still undecided and that the accord does not make Iran prone to America’s influence.

After reiterating Iran’s stance in the Middle East and relations with the West few hours after the accord was signed in July, Khamenei hammered in saying that Tehran would block any US attempt to influence Iran despite the historic accord, according to a statement posted on his website.

“They think that through this agreement — the fate of which is not clear as no one knows if it will be approved here or in America — they could find a way to intrude into the country,” Khamenei said.

“We have closed such a path and will decisively shut it. We’ll allow neither economic nor political nor cultural intrusion by the United States.”

Reports say he was speaking with members of the Islamic Radio and Television Union in Tehran.

“They seek the disintegration of Syria and Iraq, (but) with God’s help it will not happen,” he said.

After condemning the US, Khamenei also stressed his support for all forces fighting Israel, considered by Iran as “an enemy.”

“Iran defends the resistance in the region, including the Palestinian resistance, and provides support for anyone who fights Israel and strikes the Zionist regime,” he said.

Iran and UN Security Council permanent members plus Germany reached a historical agreement on July 14 putting an end to decades of strained relations. The accord will curb Iran nuke program for at least a decade and will gradually lift crippling sanctions imposed on Iran since 2006. Iran will also recover its billions of dollars frozen in foreign accounts.

The accord is yet to be ratified by the parliaments of the signatory countries.

The accord is currently being discussed by the Iranian parliament, and according to press reports, a majority of lawmakers — 201 of 290 — has requested that the agreement be submitted to a vote as a bill.

While the accord may be greeted in Iran, such is not the case in the Republican-dominated Congress which is expected to reject it in the vote due in September.

However President Obama has vowed to veto any attempt to kill the historic pact saying that it is the only diplomatic way to avoid nuclear race in the Middle East and ensure safety for Israel.