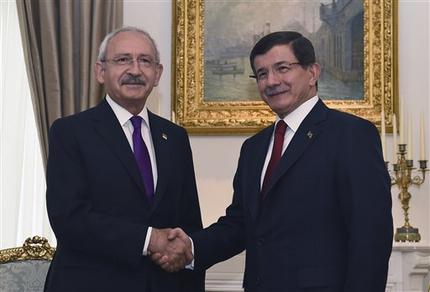 With barely less than two weeks left for Prime Minister Ahmet Davutoglu to form a new government, no major breakthrough has been made in the negotiations with the various Turkish political parties.

The latest such negotiations underway with the Republican People’s Party have not either reached any tangible result.

According to officials of the pro-secular party, a meeting between Davutoglu and the leader of their party Kemal Kilicdaroglu on Monday ended without any agreement and the two men are expected to meet again before the end of the week.

The Islamic-rooted ruling Justice and Development Party failed to gain the majority in Turkey’s parliamentary elections in June and had been seeking to form a coalition government although reports claimed that President Recep Tayyip Erdogan, founder of the party, rather yearns for new elections with the hope that the party will glean a majority of seats in parliament and thus form a government without the need for the participation of other parties.

After the four hour meeting between Davutoglu and Kilicdaroglu, Omer Celik, the culture minister and member of the ruling party admitted that it will require “great effort” to reach a “consensus” because of the different political views of the two parties. He confirmed that “no final decision was reached” but the two leaders will meet again for a “final assessment” of a possible coalition by Thursday or Friday.

The Davutoglu – Kilicdaroglu meeting had been preceded by several meetings of the two parties’ delegations which explored common grounds likely to facilitate the formation of a coalition government but they left several tough issues to the leaders to decide on.

If Davutoglu fails to reach an agreement with any of the opposition parties to form a government by August 23, the country will need to hold new parliamentary elections.