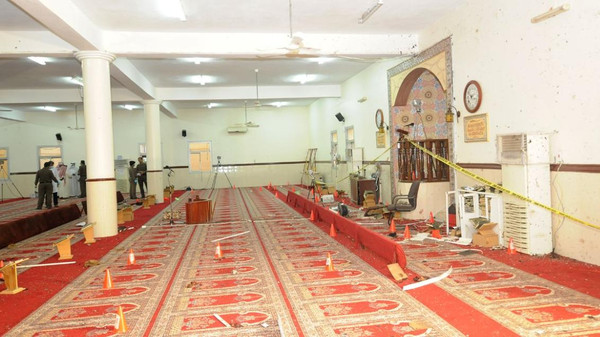 Saudi Arabia suffered on Thursday another suicide attack that targeted a mosque, in the southern Saudi city of Abha near the border with Yemen, killing more than a dozen people, most of them from the Special Weapons and Tactics (Swat) unit.

The attack against the mosque, said to belong to an Interior Ministry emergency services’ post in Abha, was claimed by Al-Hjaz province, a group affiliated to the Islamic State, in a message posted online.

Interior Ministry spokesman Major General Mansour Al-Turki said the suicide attack happened when a group of officers from the emergency forces were performing afternoon group prayers. The blast killed“at least 10 security officers, in addition to the three employees who work at the site and wounding nine others, three of them seriously,” the spokesman said.

Earlier reports by state television El-Ikhbariya said there were at least 17 casualties from the“terrorist” attack.  The death toll is one of the highest registered by Saudi forces in a single attack in many years.

The suicide bomber reportedly detonated the explosives while he was in the mosque but it is still unclear how he was able to access the ground considering that it is used by the Special Forces and serves as the headquarters of the SWAT team, which is tasked with domestic security. The interior ministry tweeted that “the remains of the dead were found on the site” and the deaths are “believed to be caused by the bombing of explosive belts.”

Saudi Arabia has boosted its fight against terrorism and recently arrested 431 suspected members of IS, accusing them of plotting suicide attacks on security forces and mosques in various parts of the country.

Recent suicide bomb attacks in Saudi Arabia had targeted Shia mosques after the IS group urged its follows to sow sectarian hatred.