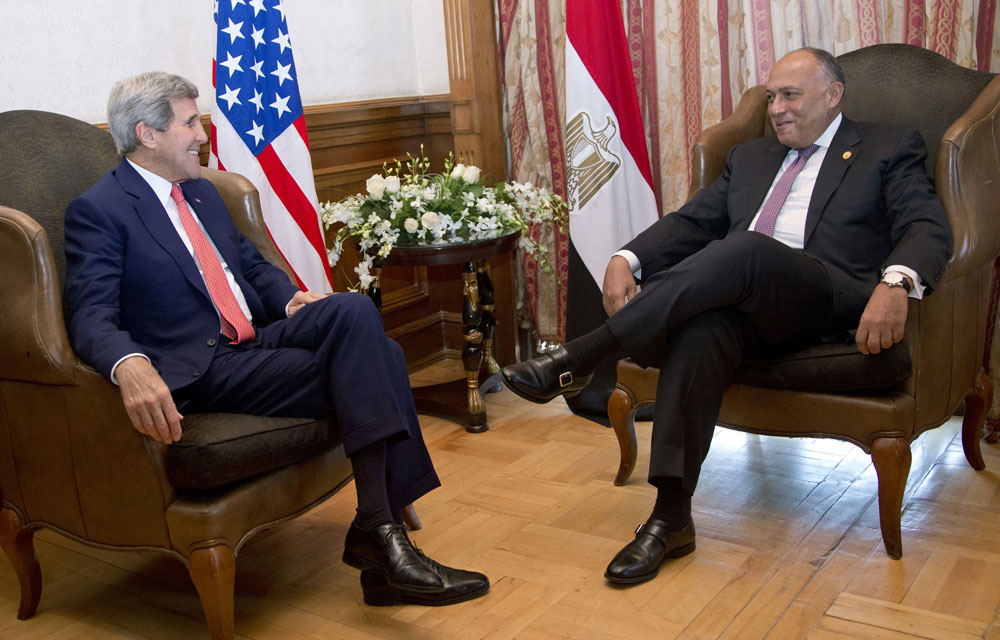 U.S Secretary of State John Kerry was in Egypt over the weekend leading his country’s delegation to the Egypt-U.S. Strategic Dialogue. Kerry’s visit is seen as a revival of the ties between Washington and Cairo after the Obama administration toughened its stance against the Sisi regime after the overthrow of Mohamed Morsi, the first democratically elected Egyptian President, in 2013 and the ensuing crackdown on pro-Morsi supporters. During a joint press conference with His Egyptian peer Sameh Shoukry, Kerry urged the Egyptian government to try “to distinguish between those who use violence to achieve their ends and others who seek peacefully to participate in a political dialogue.”

He called the government to be open to criticism and “balance” its campaign against anti-government militants.

The Egyptian foreign minister stressed that all countries regulate demonstrations as they deem it appropriate in order to preserve security and stability. He stated that all the individuals arrested had been charged of crimes including journalists who were brought to court for connivance with terrorists and not for the content of their reports. He said the accused “are afforded all forms of defense to deal with these accusations.”

Analysts believe that the aggravation of the situation in Sinai and the emergence of ISIS in Libya had prompted the U.S to restore military aid to Cairo and begin the Strategic Dialogue.

Kerry said the United States and Egypt are “moving back to a stronger base of our relationship,”characterized by increasing economic and military cooperation that will help the Egyptians to fight terrorism. He acknowledged that there have been “a little bit of tension here and there over certain issues” with Cairo as he signaled that the country is facing a “challenge” against terrorists which has put it in a “fragile” position after numerous attacks.