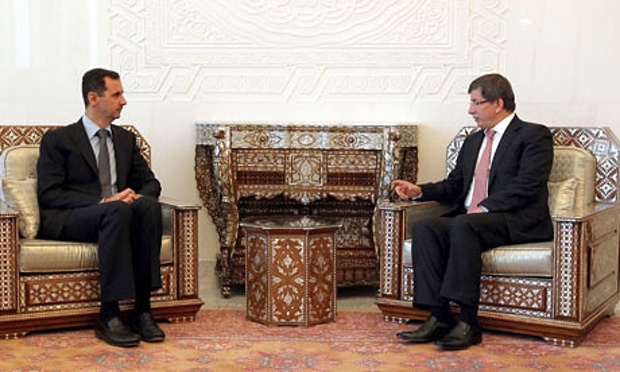 As Turkey continues to strike ISIS’s position in Syria and Kurds in Iraq, Prime Minister Ahmet Davutoglu claimed that the Islamic State is a product of the West.

The West often identifies itself as the international community in the global political arena and Davutoglu lamented that the “inactivity of the international community” when Assad lost his legitimacy has led to the creation of a “power vacuum” that is now filled by ISIS, the extremist group that has become a “product” and “a problem” of the crisis, said Davutoglu in statements quoted by CNN.

Turkey and Syria have been at odds since the beginning of the uprising against the Assad regime and tensions between them reached its peak in 2012 when a Turkish warplane was shot down by Syrian forces claiming that it breached their airspace.

Davutoglu opined that if West had helped to oust Assad from power, most of the humanitarian crimes committed by his regime and the millions of Syrian refugees displaced in neighboring countries could have been avoided. He urged the international community to support moderate Syrian rebels.

Meanwhile, the airstrikes on Kurdish positions have been strongly criticized by the PKK and the group leader Selahattin Demirtas claimed that the only crime committed by the Kurds was their party winning 13% of the parliamentary elections.

He added that Turkey didn’t want to conclude a peace deal because PKK was only a week away from disarming when the airstrikes began. He lamented that “Ankara didn’t wait.”Demirtas is against the “safe zone” plan being discussed by the U.S and Turkey.

President Erdogan has ruled out negotiating “with those who threaten our national unity and brotherhood” with reference to PKK’s armed wing that killed two police officers last week.