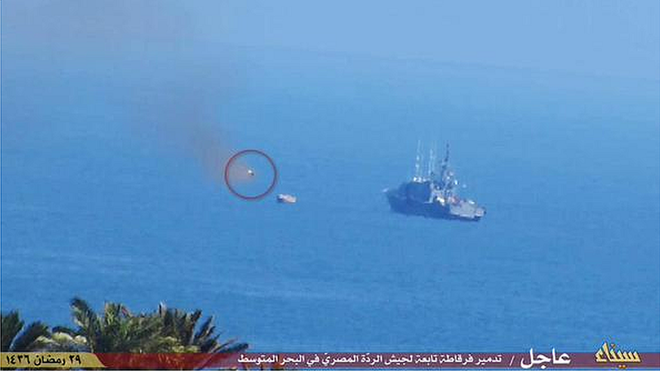 An Egyptian naval vessel was on fire and it could be seen smoking from a distance but the incident that led to it is surrounded with controversy. Sinai Province, a militant group linked to the Islamic State, claimed that it targeted the ship with a rocket while it was anchored off the Sinai Peninsula’s Mediterranean coast but Egyptian military spokesman Brig. Gen. Mohammed Samir said the vessel caught fire after exchange of fire with“terrorists” on shore.

Pictures released by the militant group showed an object that looked like a rocket heading towards the vessel before a large explosion occurred probably at the impact. Military spokesman Samir did not comment on the authenticity of the pictures nor did he give any information about the level of damage suffered by the vessel but clarified that there were no casualties while security officials hinted that there are injuries.

The militant group claimed that it destroyed the vessel but television footages have shown that it was still afloat and thick black smoke could be seen from afar.

Security officials said some crew members jumped overboard to escape the fire onboard and other naval boats nearby also rushed to rescue them.

The attack reminds Egyptian authorities that their battle with the militants groups is not only limited to ground combats and suicide attacks.

Earlier this month, more than 100 people – including at least 17 soldiers – were killed in clashes after militants launched near-simultaneous raids on military checkpoints in Sheikh Zuweid and Rafah in Sinai.

The contradictory figures about casualties in the clashes with the groups in the Sinai Peninsula prompted the cabinet to draft a law which makes it a crime to challenge official military statements.