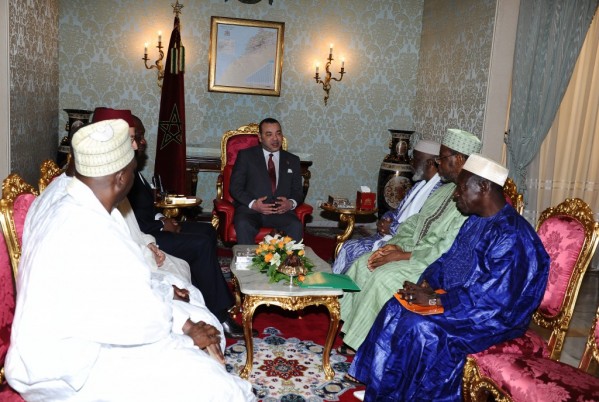 The strong & centuries-old relationship between Morocco and the African continent received Monday a boost with the announcement of birth of a new institute for African religious scholars.

The announcement was made Monday evening at a ceremony chaired by King Mohammed VI.

Unlike most countries in the North African region, Morocco has weathered the political storms and popular unrest of the Arab Spring that led to regime changes in Libya, Tunisia and Egypt.

According to analysts, the secret of Moroccan resilience lies essentially in the voluntary political and constitutional reforms ushered in by King Mohammed VI, who bears the title of the Commander of the Faithful, a religious authority and status which helped Morocco avert radicalization and prevent exploitation of religion by terrorists to serve their proper agenda.

To share its successful experience in the field with brethren Muslim African countries, Morocco is currently training hundreds of African imams to preach the precepts of a tolerant and non-violent form of Islam based on Maliki rite.

Given the success of this pilot project hailed worldwide, Morocco went even further in its solidarity and cooperation with African countries by setting up “Mohammed VI Foundation for African Ulemas”.

The Foundation seeks to inculcate African Ulemas the values and principles of moderate Islam, based on the Ashaari doctrine and the Maliki School of Islamic thought.

The ultimate goal of this landmark undertaking is to preserve the unity of the Islamic religion, combat extremism and build up a bridge of dialogue with Islamic scholars in the African continent.

As a religious reference authority, Mohammed VI Foundation for African Ulemas is empowered to protect the Islamic faith and the spiritual unity of the African people from all divisions and conflicts fuelled by extremist movements with distorted radical ideologies that tarnish the sanctity of Islam and its teachings.

To win the battle of ideas against extremists who sow hate and prey on young vulnerableantagonised, disaffected and disenfranchised people, Morocco, — which stands in the region as a beacon of peace, stability and modernity–, brings in its expertise in religious training.

To fight jihadists and their poisonous ideology, Morocco, a disciple of the moderate Maliki school of Islam, offers its religious model based on tolerance, intercultural dialogue and respect of other faiths.

It is however a daily and long-term battle, a strive that demands persistence, unwavering commitment and a coordinated and concerted action.