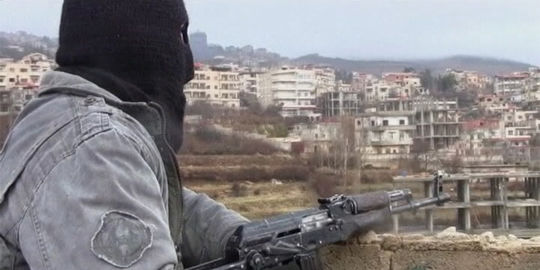 Rebel forces in Zabadani have been pushed back by forces loyal to Assad with the help of Hezbollah. The town is strategically located because it is close to Damascus and also has a highway that runs through it linking the capitals of Syria and Lebanon.

Zabadani has been under the control of the rebels since 2012 when the demonstrations against the Assad regime started and was the last major stronghold of the rebels along the Lebanese border. Reporting the progress in the area, state television said that “heroic army forces, in cooperation with the Lebanese resistance, took control of Al Jamaiyat neighborhood in western Zabadani and Al Sultana neighborhood in the east of the city” while the official SANA news agency claimed that “dozens of terrorists” were killed during the offensive.

Zabadani is in the Qalamun region and clashes have been going on there since 2013. Activists have claimed that most of the civilians have fled the town when fighting started in the region. The Syrian Observatory for Human Rights said helicopters have dropped more than 20 barrel bombs as the fight with rebels in the eastern and western part of the town continues. Pro-Assad forces have reportedly registered around 14 casualties.

Progress in Qalamun will be a boost to the government because it had been retreating in other parts of the country especially considering the loss of an army barracks to rebels in western Aleppo on Saturday.

If the government is able to put Zabadani under its control, it would facilitate the movement of troops and arms for Hezbollah and that could further increase their role as they continue to fight on the side of the government troops.