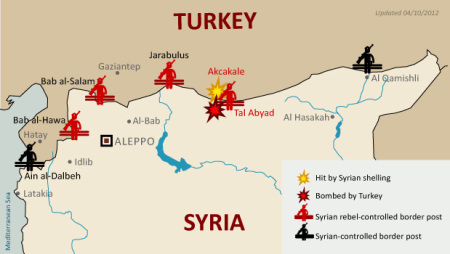 Speculations of possible crackdown by the Turkish military on the militants of the Islamic State has been renewed after Hurriyet reported that a meeting of the troop commanders positioned along the border with Syria has been scheduled for next week at the military headquarters in Ankara. The meeting is expected to be centered on an operation inside Syria even though Prime Minister Davutoglu ruled out intervening there because the move could put Turkey at risk and threaten its security.

Following ISIS attacks on Kobane at the end of last month and recent intense fighting between pro-Assad forces and rebel groups in Aleppo, Turkey has reinforced its military presence along the border with around 54,000 soldiers together with tanks and anti-aircraft missiles.

The meeting between the commanders is expected to enhance the military presence along the border with reports monitored on Hurriyet claiming that a deployment of more than 400 armored vehicles will be discussed as well as the role of the Air Force in a possible offensive operation.

Speculations were further heightened by the visit of Special Forces commander Zekai Aksakalli to the southern border province of Kilis where he inspected a newly deployed convoy of artillery and missile batteries according to Anatolia reports.

Turkey is closely following developments in Syria and Davutoglu said last week that they don’t want to see “neither terrorist group nor [Syrian] regime atrocities” as he showed concerns about Kurdistan Workers’ Party (PKK) and the pro-Kurdish Syrian Democratic Union Party (PYD) and their “threatening”ties.

Ankara has rejected calls to participate in the fight against ISIS and has also barred Kurds from crossing into Syria. Its decisions may be explained by its concerns to be targeted by ISIS.