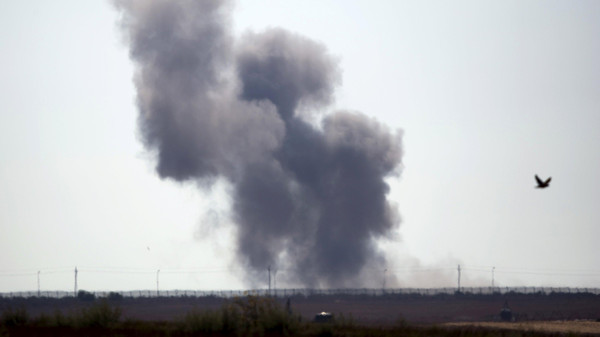 Sinai Province, an IS affiliated group in the Egypt Sinai Peninsular, killed Wednesday 17 Egyptian soldiers in a series of attacks against army check-points in the Sinai according to army sources.

The Islamic State of Iraq and Syria branch in Egypt, known as Sinai Province claimed responsibility of the attacks in twitter message.

An army statement aired on TV confirmed the losses. The statement said 17 soldiers had been killed and 13 others wounded in the attacks. Army officials said that about 100 Jihadists have been killed in response to the attacks and that the army has taken full control of the area. The conflicting number of casualties could not be confirmed.

The army launched F-16 jets and Apache helicopters attacks against the militants’ positions in Sheikh Zuweid.

Reports from the army said, about 70 militants attacked five army check-points, with other militants taking positions on rooftops and mining the streets leading to the town’s police station.

Gunshots and fire trade lasted for about eight hours. Witnesses and security sources also reported hearing two explosions in the nearby town of Rafah, which borders Gaza. The sources said all roads leading to Rafah and Sheikh Zuweid were shut down and residents were staying in their homes.

Egypt security authorities have recently beefed up security measures in the Sinai, region prone to violence against the soldiers. Egyptian authorities have accused Hamas of Gaza of supporting the militancy in the Peninsula. Egyptian soldiers have discovered and destroyed secret tunnels used by the militants to smuggle in weapons.

Mohamed Morsi was toppled from power in 2013 by an army led move. He has been, along other Muslim Brotherhood leading figures, handed death sentence on mass jail break charges and conspiracy with foreign enemies.

President al-Sisi has also pledged to nullify any group or organization deemed as threat to the national security. The Egyptian government has adopted on Wednesday draft anti-terrorism laws that will enable to curb more efficiently terrorism in the country.

Al-Sisi has also emerged as leading figure in the Arab world to have taken a strong stance against terrorism.

Egyptian authorities have banned the Muslim Brotherhood organization comparing it to the IS group.

In a separate operation on Wednesday, Egyptian special forces raided an apartment in Cairo, killing nine people among whom Nasr al-Hafi, a lawyer and a former lawmaker member of the Muslim Brotherhood. Security forces said the men were armed and were planning attacks.

The Muslim Brotherhood organization denied the claim that the men were armed and were plotting attacks.