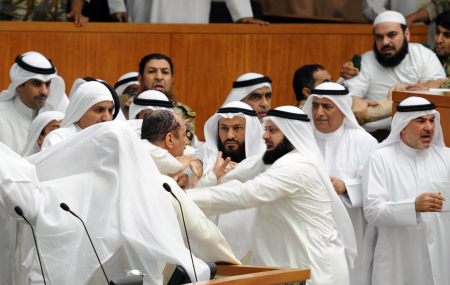 “‘Go and rectify your sect’” was enough of an insult for Faisal Al Duwaisan to tender his resignation as a Member of Parliament as he deplored that the parliament is unwilling to apply the bylaws of the parliament in such a situation.

Duwaisan said he was verbally abused by fellow parliamentarian Hamdan Al Azimi in what he described as “the most painful insult” to him and the Shiite sect.

The incident was provoked during a regular parliamentary session debate with the finance minister. Al Azemi was lamenting that the budget of the parliament’s television station and newspaper was high because it costs KD5 million. The minister denied the claim saying that it is “not true” and Duwaisan added that the amount was not sufficient. Duwaisan comments were unwelcomed by Azimi and it led to a verbal exchange between them before their colleagues added their voice to it.

Duwaisan tendered his signature to the parliament afterwards citing in his letter that he had “observed that the parliament was not willing to take a clear action to apply the law against Al Azemi who insulted Kuwaiti Shiites.” He stressed that “such an insult goes well beyond my person to target a sect followed by several Kuwaitis.”

Around one-third of the Kuwaitis are Shiites and the emirate had to introduce a national unity law in 2013 to curb the rising sectarian tension within its boundaries with several years of imprisonment. Al Duwaisan said he will not withdraw his resignation unless Azemi publicly apologizes or parliament takes disciplinary action against him. 7 of Kuwait’s 50 parliamentary members are Shiites.

Duwaisan said his resignation is due to his respect for his sect as he apologized to those who elected him for his decision.