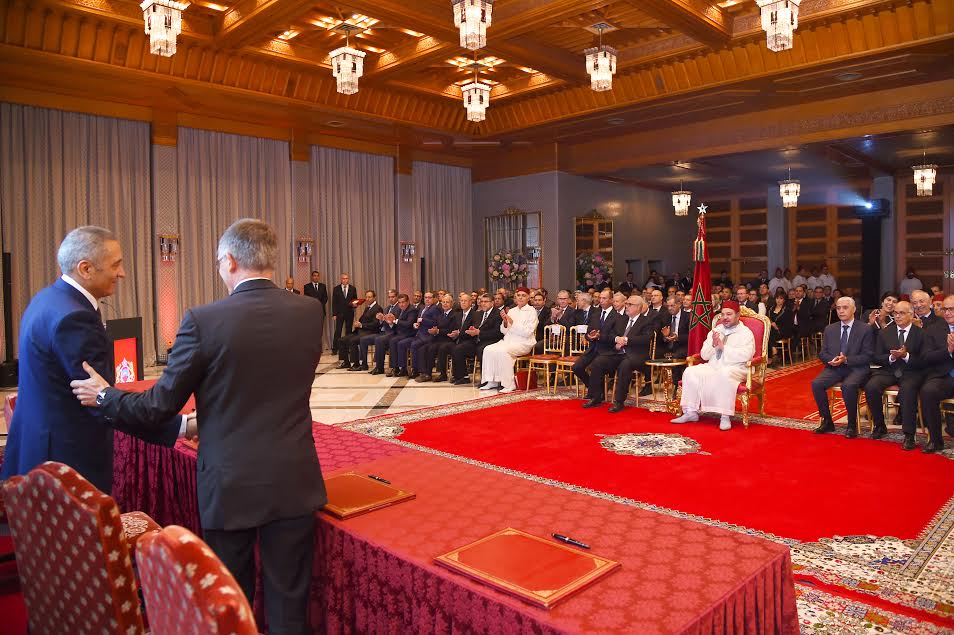 The French automaker PSA Peugeot finally unveiled last week its ambitious plan to build a factory in Morocco that will have a production capacity of 200,000 vehicles and 200,000 engines per year destined to the local market, but also to the Middle East and Africa promising markets.

The plant scheduled to open in 2019 will assemble engines and vehicles in the compact and mid-sized cars, categories that form the pillar of Morocco’s automobile industry.

The plant will require a $632 million investment (6 billion dirhams) and will start with producing 90,000 vehicles and engines. Production will increase according to demand, said the French group in a release.

The deal, viewed as a win-win, was sealed last Friday in Rabat by the group chairman Carlos Tavares and Moroccan Minister of Industry, trade and Investment Moulay Hafid Elalamy at a ceremony chaired by King Mohammed VI.

The plant, the second of its kind in Morocco after the one set up by the other French major automaker Renault in  the northern city of Tangiers, is expected to generate no less than 4500 direct jobs (including 1500 senior engineers and technicians) and 20 000 indirect jobs, according to the company. Eventually, it is expected to generate a billion euros of turnover from exports, with strong local integration, the rate should increase from 60% at startup to 80%.

The Moroccan Minister applauded the deal as “a win-win partnership,” saying that negotiations with the French group started just three months ago.

“Morocco will take the opportunity to expand its industrial base, go upmarket and create sustainable jobs, while PSA will benefit from the strategic positioning and competitive prices offered by Morocco to conquer the markets of the Middle East and Africa,” he said.

Echoing him, Carlos Tavares said “Africa and the Middle East represent a huge potential for us. In 2015, we expect to sell 200,000 vehicles in these markets. Our ambition is to reach one million vehicles sold by 2025, knowing that the market size of the two regions is estimated at 8 million vehicles over the next ten years, against only 5 million vehicles today. “

PSA will built its plant in Kenitra Atlantic Free Zone, some 30 km to the north of Rabat.

This choice is justified by the presence of several automotive suppliers in Kenitra, its proximity to the main logistics parts of the country and abundance in this region of a highly skilled workforce.

According to press reports, the choice has been directed by the Moroccan State to achieve a regional balance, as put by Moulay Hafid Elalamy. Wealth must no longer be concentrated in Casablanca and Tangier, he was quoted as saying.

The automotive sector in Morocco employs 80,000 people and generated at the end of 2014 a turnover in exports of nearly 40 billion dirhams, exceeding the phosphates sector, hitherto Morocco’s prime foreign currency earner. The Renault plant in Tangiers participates by 50% in these sales performance.