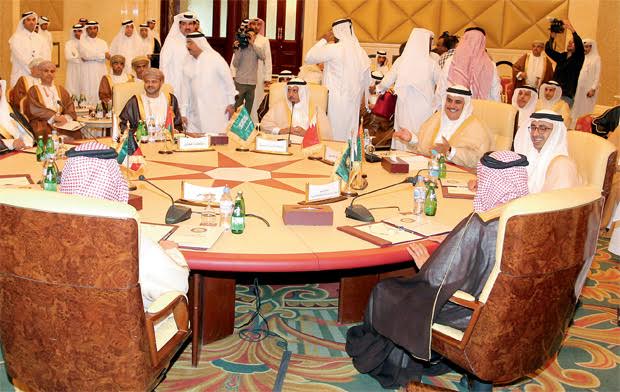 The meeting of the Gulf Cooperation Council (GCC) Ministerial Council ended in Riyadh with a statement dwelling on all the issues confronting the Middle East and North Africa.

The six-member body also criticized some countries for their actions against the GCC members.

“The GCC countries stand in solidarity with Qatar” and “firmly condemn the hateful campaign that is trying to discredit the merit of Qatar in hosting the 2022 World Cup,” the council said in the statement.

Doha has been accused by Western countries to have resorted to bribery to win the hosting rights of the World Football cup but the GCC ministers stated that it was “won with great merit and through an honest competition as testified by everybody.”

Dwelling on the insecurity, war and terrorism in and around MENA, the Ministerial Council renewed that the GCC is against all forms and manifestations of extremism and rejected claims that some of its members support terrorism.

The statement insisted that terrorism is not linked to Islam and that the GCC members firmly condemn terrorism under all its forms and are active in the fight against the militants of the Islamic state.

The escalation of violence threatens regional and international security, the statement said.

The Ministers also showed support to Saudi Arabia in its tussle with Sweden over human rights and urged Iran to cooperate with the UAE for direct negotiations or resorting to the International Court of Justice in order to end the territorial dispute over the Greater Tunb, Lesser Tunb and Abu Musa islands.

The Council also urged Israel to withdraw from the territories that it has occupied from 1967 onwards for the establishment of an independent Palestinian state.