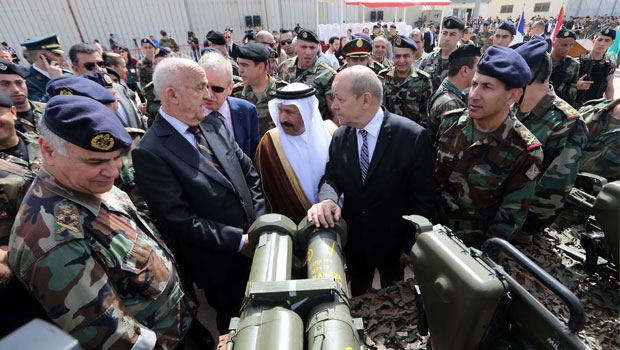 Beirut’s fight against extremism has received a material boost after the arrival of the first consignment of the Saudi-funded weapons in the country. The weapons are from France and their Defense Minister Jean-Yves Le Drian was present during the handing over ceremony. Extremists groups in Levant pose a threat to Lebanon’s security.

Saudi Arabia provided $3billion to arm Lebanon’s ill-equipped forces in order to counter possible advances of the Islamic State. Political divisions are strong in the country and there are fears that an attack by Jihadists could drag the country into chaos.

During the handing over ceremony of the military consignment, Lebanon’s Defense Minister Samir Mokbel said “a victory for Lebanon against terrorism is a victory for all countries, near and far, who are threatened by terrorism.” He thanked Riyadh and Paris for their respective gestures and their understanding of the challenges the country faces “whether militarily at the border, or internally with the influx of refugees that threatens general stability.”

Saudi Ambassador to Lebanon Ali Awad Asiri said Riyadh’s financial support is a “gift” that will “support the Lebanese army and legitimacy in Lebanon” as the country “faces more challenges than ever.” Lebanon’s border with Syria has often been threatened by jihadists. Saudi has close ties with some Lebanese political parties but Hezbollah is one of its major critics.
French Defense Minister Jean-Yves Le Drian hailed the fraternal ties between France and Lebanon. He said the unprecedented pressure from jihadist groups makes it “essential that Lebanon’s friends and allies mobilize to contribute to its security and stability.”

Within the next four years, Lebanon will receive 250 combat and transport vehicles, seven Cougar helicopters, three small warships and a range of surveillance and communications equipment as art of the deal.