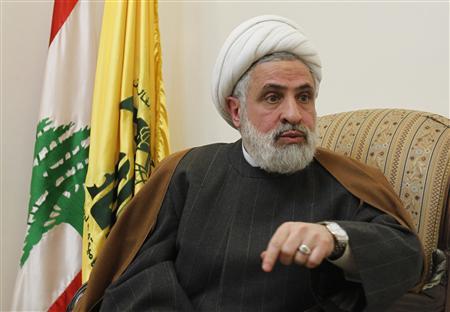 Hezbollah’s second in command, Deputy Chief Naim Qassem has compared Saudi Arabia to Israel as he slammed the U.N arms embargo on the Houthi Movement as a one sided decision that doesn’t support a political solution. Hezbollah is against the Saudi-led military operations in Yemen although the critics of the former say that it is a tool of the Iranian regime.

During an interview with France 24, Qassem said “what Saudi Arabia is committing [in Yemen] is identical to what Israel commits in Gaza,” because “it is about attacking infrastructure and shelling civilians” rather than urging for a national dialogue to reach a political solution. He accused Riyadh of committing genocide in Yemen.

Saudi Arabia has stressed that the objective of the military operation is to bring back President Hadi as the legitimate president of Yemen. The operations received a boost this week when the U.N Security Council imposed an arms embargo on the Houthis and called for their withdrawal from seized areas.

Qassem said the resolution is “unjust” because it concentrated on issues related to the civilians, the wounded and the destruction of infrastructure. He said it didn’t take into consideration the global context in Yemen as he stated that “the Saudi aggression” should have been stopped in order to promote dialogue.

In another vein, Hezbollah’s parliamentary group, the Loyalty to Resistance bloc, in its weekly statement released on Thursday took a strong position against the coalition and the resolution. It highlighted that “the catastrophic results and consequences on the stability of Yemen and the region have confirmed that the Saudi regime’s aggression against Yemen is a historic and strategic sin” that “no unfair international decision could erase […] even if issued under the 7th article” of the U.N charter.