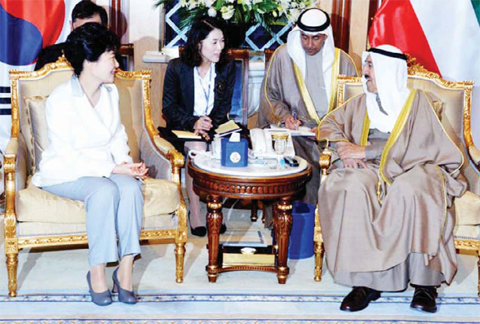 Ahead of the signing ceremony, South Korean Minister of Trade, Industry and Energy Yoon Sang-jick said they are hoping to intensify their cooperation with Kuwait in sectors such as construction, healthcare, industry and electricity. There is a South Korea-Kuwait Business Partnership forum going on in Kuwait and Yoon thinks that ties between the firms of the two countries will help to promote bilateral economic relations. 28 South Korean firms are taking part in the forum although there are around 100 of them operating in Kuwait.

Bilateral trade between the two countries reached $19 billion last year. Kuwait is South Korea’s second and third supplier of crude oil and liquefied petroleum gas respectively while Korea is a major export destination for Kuwait. Most of the South Korean companies in Kuwait are active in the construction, energy and infrastructure sectors and the country has served as a big Middle Eastern market after South Korean construction companies were able to reach the $40 billion mark of cumulative value at the end of last year.

The Asian country is also interested in developing Kuwait’s health sector because an estimated 3,000 Kuwaitis seek foreign treatment annually at a cost around half a billion dollars.

After Kuwait, President Park will head to Saudi Arabia, the United Arab Emirates and Qatar during the week.