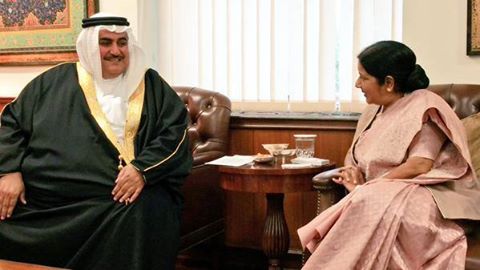 Indian foreign minister Sushma Swaraj and her Bahraini counterpart Sheikh Khalid Bin Ahmed Bin Mohamed Al Khalifa have ended talks with plans to reinforce their defense and military cooperation. Talks between the two officials also centered on issues of common interest in the region such as the rise of the Islamic State of Iraq and the Levant (ISIL) and the threat the group poses to the region as well as the security situation in West Asia and South Asia.

The conflict in Yemen and the wars in Syria and Iraq were also discussed by the ministers and a source claimed that Bahrain is concerned about the rapid rise of the extremist group Islamic State of Iraq and Levante (ISIL) that has declared a caliphate in Iraq and Syria.

The statement added that Bahrain is willing to invest in India considering the “enormous growth potential of the Indian economy.” The Gulf State also wants talks on avoiding double taxation to begin in order to promote two-way investments and to encourage public and private sectors to invest.

Cooperation in the areas of education, exchanges in sectors of media and communication, and issues concerning the expatriate Indian community in Bahrain were also discussed.