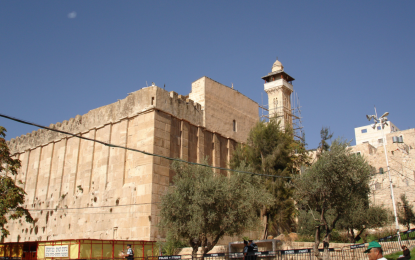 Reports claiming that Prime Minster Netanyahu will be visiting the Cave of the Patriarchs in the West Bank city of Hebron were strongly condemned by Hamas and Fatah with warnings that it could lead to “severe escalation.” Revered by both Muslims and Jews, the site is believed to contain the graves of the prophets Abraham, Isaac and Jacob. The Cave of the Patriarchs is known to the Muslims as the Ibrahimi Mosque.

Netanyahu is expected to visit the site as part of his electoral tour of Jewish settlements in the West Bank, reports stated. Hamas in a statement warned “the criminal Netanyahu of the consequence of storming and desecrating the noble Ibrahimi Mosque in Hebron city” and stressed that the Prime Minister’s visit will be considered as “a serious escalation to which our people won’t remain silent.” Israel considers Hamas as a terrorist organization.

According to Israel Radio, a Fatah spokesman said “the Ibrahimi Mosque is sacred Muslim property” and all holy places will be defended.

Netanyahu’s spokesperson Mark Regev refuted the reports and claimed that a visit to the site was part of the prime minister’s schedule.

Muslim and Jewish worshippers that go to the site are separated from each other in order to avoid a repeat of the 1994 massacre when extremist Jewish settler Baruch Goldstein killed 29 Palestinian worshippers on the site.

At the beginning of the month, President Reuven Rivlin visited Hebron but it led to clashes between Israeli left-wing protesters who were against the visit and members of the local Jewish community.

Hebron is home to roughly 160,000 Palestinian Muslims and some 500 Jewish settlers. The latter live in a number of Jewish-only settlement compounds heavily guarded by Israeli troops.