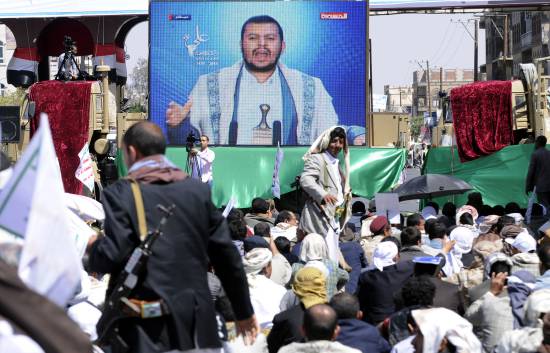 Abdel-Malek al-Houthi, leader of the Shiite Houthi rebels, has stated on the rebel controlled Masirah TV that the militia group is willing to see a peaceful transition in the country after the handing over presidential aide Ahmed Awad bin Mubarak to local tribes in the southern province of Shabwa. Social and activists groups question the intentions of the Houthi leader.

Abdel-Malek blames the political forces and the southerners for the crisis in the country. Houthis descended from their stronghold in the north to the capital and occupied some parts of it. The group lately took over state institutions, including the presidential palace, military camps and state media after a constitutional draft divided the country into six federal states. Houthis don’t want the number of federal states to be determined by the constitution.

Critics have accused the group of power grabbing but the Houthis claim that they want a fair share of it. The leader of the group has invited “all free and honorable people across the spectrum – academics, tribes, elders, all people – to a large, inclusive, broad, exceptional, and historic meeting Friday in Sana’a.” He also wants a strong stand against “anarchists” in order to ensure a “peaceful transfer of power.”

President Hadi and Prime Minister Khaled Bahah have all resigned in protest to the actions of the Houthi rebels and the kidnapping of certain political and government figures. However, the parliament is yet to have a session to decide on their resignations due to the ongoing chaos.

Hisham Al-Omeisy, an activist, said it will be difficult to believe Abdel-Malek’s calls because a similar meeting during their quest for dominance was filled with pro-Houthis as he wonders what will happen since they have the upper hand now.