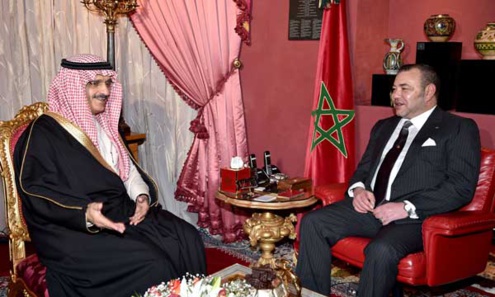 Rabat and Riyadh seem more determined than ever to carry on their consultations on the fight against terrorism and to upgrade their cooperation in this fight through intelligence sharing.

It is undoubtedly in this context that the chief of the Saudi intelligence Department, Prince Khaled Ben Bandar Ben Abdelaziz, visited Morocco on Monday carrying a message from King Abdullah Ben Abdelaziz of Saudi Arabia to King Mohammed VI of Morocco.

Prince Khaled, who was appointed to the position in July 2014, conveyed the message to the Moroccan King at an audience that was attended by Mohammed Yassine Mansouri, Director General of the Moroccan intelligence department, known by its French acronym DGED, Prince Khaled’s close aides, and other officials.

The Moroccan official media did not disclose the contents of the Saudi monarch’s message but there is every indication that it was related to the two countries’ cooperation in matters of anti-terrorism struggle, at a time the Islamic State group and other terrorist groups are threatening the security of several States in the Arab and Islamic world and beyond.

Saudi Arabia is actually facing the threat of the Islamic State group at its northern borders while Morocco is frequently cited by terrorist groups as a potential target of jihadist operations, as both countries are participating, although at different levels, in the anti-Daesh coalition led by the United States.

Since Saudi Arabia announced its participation in the coalition that raided the Islamic State group in Syria, the terrorist group called its followers to attack Saudi security forces, members of the Shiite minority and foreigners settled in the kingdom.

Although Saudi Arabia strengthened security measures at its borders with Iraq since July 2014, deploying thousands of additional troops in preparation for all contingencies after the advance of the IS fighters, in November last year, an attack against Shiites in the eastern province of Al Ahsa left eight dead. According to Saudi officials, the attack was launched by IS fighters.

And this January 5, two Saudi border guards were killed and a third was wounded during an attack against the border between Saudi Arabia and Iraq. Although the attack was not immediately claimed, experts said it was the deed of the IS group. Besides the presence of the IS in Syria and Iraq which threatens the Kingdom from the North, the Islamist militias clashing in Yemen constitute a threat to the southern parts of the country.

It is not therefore surprising that Saudi Arabia seeks to enhance its cooperation to face up the mounting terrorist threat and to benefit from Morocco’s experience in the field, since the North African country has so far succeeded, thanks to its preventive policy and the skills of its security and intelligence services, to drive back the Jihadist threat at home.

However, the two kingdom’s security cooperation is nothing new. The most recent such cooperation dates back to August 2014 when a Moroccan military contingent was dispatched to Saudi Arabia to back the Saudi National Guard monitoring the borders with Iraq.

Later, in October 2014, Morocco announced it was extending military and intelligence support to the United Arab Emirates to assist the country in its anti-terrorism struggle.

Both Saudi Arabia and the United Arab Emirates are member of the Gulf Cooperation Council (GCC) which also musters Bahrain, Kuwait, Qatar and Oman. In view of the special relationship existing between Morocco and the GCC members, the two sides concluded as of 2011 strategic partnership accords.

Other countries in Europe, mainly France and Spain, and in Africa frequently request Morocco’s assistance in their struggle against terrorism.