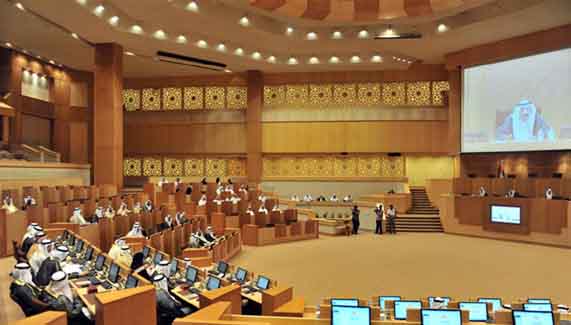 Speaker Mohammed Ahmed Al Murr of the Federal National Council (FNC) of the United Arab Emirates (UAE) has reacted to the comments made by a member of the Kuwait’s Muslim Brotherhood on the state’s National Assembly channel. Member of Parliament Mubarak Al Duwailah criticized General Shaikh Mohammed bin Zayed Al Nahyan, Crown Prince of Abu Dhabi and Deputy Supreme Commander of the UAE Armed Forces in a manner that could affect the relationship between the two countries. The FNC and Kuwait’s National Assembly have good relations and cooperate closely.

The comments of Duwailah have since been censored but it showcases the opinion of Kuwait’s Muslim Brotherhood towards the UAE. Neither the party nor the National Assembly has condemned the comments. Speaker Murr said the UAE categorically rejects the statements made by Duwailah. He has called on the Kuwaiti National Assembly “to block the attempts made by such individuals whose aim is to damage the brotherly relations, solidarity and cooperation between the UAE and the brotherly State of Kuwait.”

Speaker Murr discredited the statement made by Duwailah as he hailed General Shaikh as a national UAE symbol who sacrifices and works very hard for the benefit of his people and the Gulf Cooperation Council. He credited him for the commotion, stability, sustainable development, progress and prosperity that the UAE has been enjoying as well as protecting them from terrorist acts which have marred the region.

Murr also reminded Kuwait that diplomatic ties between countries in the region are being strengthened especially after the Gulf Cooperation Council Summit in Qatar. He therefore urged that baseless allegations that are “are clearly aimed at sparking divisions between the GCC peoples and states” should not be encouraged.