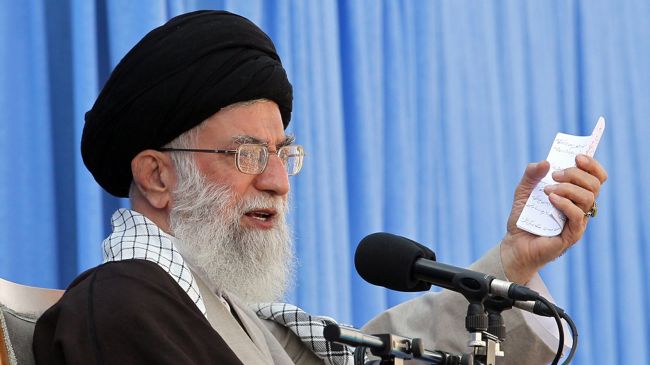 Iran’s Supreme Leader Ayatollah Ali Khamenei has tweeted a 9 point plan solution to the Israeli-Palestinian conflict. It ranges from a peaceful solution of the conflict to the arming of the Palestinians. The plan referred to the Israeli government as a “fake Zionist regime” that proudly achieves its policies “by means of infanticide, homicide, violence and iron fist.” It underlined that the only way of ending these “Israeli crimes” is by adopting the “practical and logical mechanism” that the Islamic Republic has proposed to the International Communities.

Claiming that the “elimination of Israel” without massacring any Jew is possible, the plan proposed a referendum wherein “all the original people of Palestine including Muslims, Christians and Jews” will vote no matter where they are but “the Jewish migrants who have been persuaded into emigration to Palestine” will be excluded. A government will be formed after the referendum and it will decide if “the non-Palestinian emigrants” could continue living in Palestine.

The plan conceded that Israel will not easily accept these proposals but added that the support of independent nations, governments and global public opinion could force it to succumb to the plan.

Israel’s refusal of this “fair and logical plan” which calls for a referendum should lead to a “powerful confrontation and resolute and armed resistance.”  It labeled Israel’s government as a “ruinous regime” that “commits suicide beyond one’s thought and imagination” and considers ‘peace’ as a “trick for more crimes and occupation.” The plan urged those who are interested in Palestine’s future to arm the West bank as it was done with Gaza but rejected a classical war by the army of Muslim Countries, did not condone throwing migrated Jews in the sea and deemed arbitration by international institutions as unacceptable.