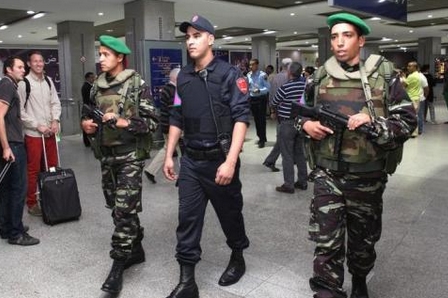 Morocco has vowed to provide military and intelligence support to the United Arab Emirates to help the Gulf country in its anti-terrorism struggle. “The Kingdom of Morocco will provide an active support to the UAE in its fight against terrorism and its efforts to maintain regional and international peace and stability,” said the Moroccan Foreign Ministry in a statement released on Tuesday.

This action, which will reinforce the historic and multifaceted military and security cooperation with Gulf States, will cover “military operational cooperation and intelligence,” said the statement without specifying if Moroccan troops will be dispatched to the Gulf State.

Security cooperation between the two countries started shortly after the foundation of the Emirate in the seventies of the past century and hundreds of Moroccan soldiers and police agents had been dispatched, over several decades, to the UAE to help ensure its security and train its own forces.

The Moroccan Foreign Ministry statement said the initiative comes to “complete” the action “carried out on the Moroccan territory,” as both countries are facing the same terror threats, alluding to the dangers posed by the Islamic State group.

Last Saturday, Morocco announced it was upgrading its anti-terrorism vigilance through the deployment of a new mechanism, dubbed “Hadar,” that will “cover various sensitive sites” in the country and will involve “the Royal Armed Forces, the Royal Gendarmerie, the Police and the Auxiliary Forces.

At a press briefing on Wednesday, Moroccan Foreign Minister, Salah Eddine Mezouar, recalled that Morocco has been mentioned as a target country by terrorist organizations. He said Morocco’s internal vigilance plan as well as its acting solidarity with the UAE are all part of its active contribution to the fight against terrorism, at its roots and in the spots where it thrives.

The Moroccan official made it clear however that Morocco’s support to the UAE is not part of the international coalition actions against IS group but falls in the context of bilateral cooperation. Morocco and the UAE will hold coordination meetings to define the nature of support to be provided, he said adding that the support operation will be conducted under the command of the UAE.

It is not the first time that Morocco will participate in a security operation in a bilateral framework. It has been involved in several military operations for the protection of national security and territorial integrity of sisterly and friendly countries including in Congo, the Golan, former Zaire (now DRC), or Saudi Arabia in 1990, following the Iraqi invasion of Kuwait.

The longstanding security and military cooperation between Morocco and Gulf States took a new dimension in 2011 after the two sides signed a strategic partnership agreement.