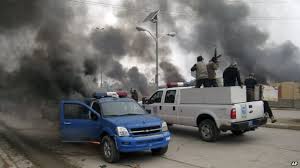 Iraqi security forces are hard-pressed by a powerful jihadist group influenced by Al-Qaeda, threatening to seep into Baghdad, officials and analysts report. There is uncertainty about how far the army and police can withstand militant attacks following recent clashes, with parliamentary elections fast approaching. Anti-government fighters hold Fallujah, a town in close proximity of Baghdad, among other territories.
Clashes triggered by the onslaught of the Islamic State of Iraq and Greater Syria (ISIS) into the Abu Ghaib area demonstrate the group’s ambition.  Anti-government fighters paraded with several vehicles last week in Abu Ghraib; an alarming sign of ISIS influence according to witnesses and online videos.
Following assaults on Fallujah and Ramadi by militants in January, government security forces have reasserted themselves in Ramadi. However, a stalemate remains in Fallujah with sporadic clashes and regular shelling.  The clashes and shelling have left at least three people dead and over 50 injured. An army lieutenant colonel claimed that “ISIS fighters are trying to ease the pressure imposed on them in Fallujah.”
However, senior security officials maintain that any action against Baghdad by the jihadists is futile and that recent efforts are a sign of weakness.
“They do not have the power, and we have huge military reinforcements to stop them,” said Brigadier General Saad Maan, spokesman for the Interior Ministry and the Iraqi capital’s security command center. Another senior security official was skeptical of any penetration. He said that “the siege of Fallujah will continue until their gathered forces are depleted.”
Charles Lister, a visiting fellow at the Brookings Doha Center, highlighted that the massive convoy in Abu Ghraib, “underlines the sheer scale of [ISIS] capacity to operate with near impunity in some Sunni areas of the country.”