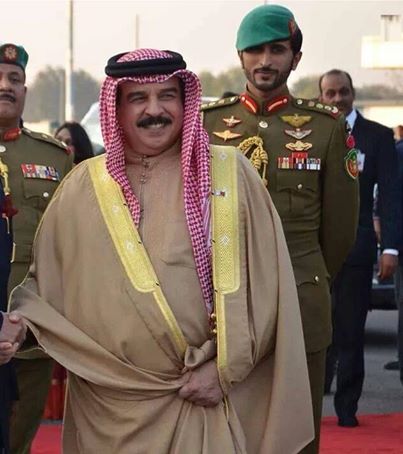 Shaikh Hamad Bin Isa Al Khalifa of Bahrain accompanied with a high ranking delegation composed of cabinet members, government officials and important businessmen has begun a three-day visit to Pakistan. He was welcomed by the Prime Minister Nawaz Sharif. Both countries will be using the visit as a means of reinforcing their relations and cooperation by signing several agreements in diverse areas. The promotion of trade and commerce will also be given a center stage.
The Foreign Office of Pakistan said in a released statement that the King’s visit is of special significance because the last time a Bahraini king made an official visit to Pakistan dates back to 1974. The visit is considered to be a good opportunity to explore ways and means geared towards strengthening the diverse areas of mutual interest especially in bilateral trade and Bahraini investments in Pakistan.
Six bilateral agreements and memorandums of Understanding have been concluded in the fields of trade, energy, investment, agriculture and aviation.  Prime Minster Sharif said they will “welcome Bahraini investments in mega projects in the field of energy, downstream oil industry, port development, mining and minerals, infrastructure, banking and financial sectors.” Pakistan wants to develop its trade with Bahrain and other Gulf countries but the Pakistan Free Trade Agreement is yet to be finalized. The Prime Minster told the king that Pakistan will “deeply appreciate Bahraini support for an early finalization” of the agreement.
The multiple signing of the agreements and the MoU will help the two governments to develop means of reinforcing their close and cordial relations based on mutual trust and understanding. King Shaikh Hamad Bin Isa Al Khalifa will be having an audience with the President before the end of his visit.