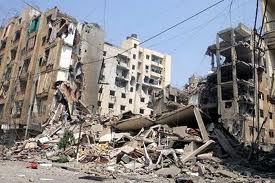 In an effort to deter Hezbollah, Israel’s Air force chief Major-General Amir Eshel threatened Lebanon’s Hezbollah guerrillas to get rid of their bases in residential buildings which pose as a menace to the Israeli state. “We will have to deal aggressively with thousands of Hezbollah bases which threaten the State of Israel and mainly our interior,”Eshel said in a speech. The threat is part of endeavors by Israeli officials to prepare the international community for high civilian casualties in any new confrontation with Hezbollah in Lebanon.
Eshel told the Fisher Institute for Air and Space Strategic Studies that the Hezbollah move is aimed at creating “a kind of human shield” as civilians live above and below but that it can’t stop them from attacking the bases.He stressed “that is where the war will be. That is where we will have to fight in order to stop it and win.” To reveal the high risk of civilian death, Israeli Defense Minister Moshe Yaalon last year showed U.N. Secretary-General Ban ki-Moon an Israeli map of alleged Hezbollah positions in southern Lebanese villages.
Iran and Syria were accused of supplying Hezbollah with missiles in the 2006 fight against Israel’s technologically superior military which claimed 1,200 and 160 Lebanese and Israelis lives, respectively. With more than a 100,000 missiles and rockets,Hezbollah has ever since been improving on its military capabilities to repel further Israeli attack on Lebanon. Eshel also boasted of their improved military capabilities and claimed Israel’s military to be stronger than Hezbollah. Israel is nevertheless worried aboutthe help being rendered by Hezbollah to President Bashar al-Assad in fighting the almost three-year-old war because of possibilities thatit can obtain more advanced weaponry from Assad’s arsenal.