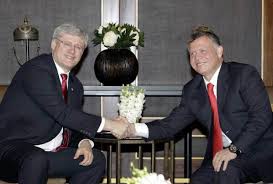 Canadian Prime Minister Stephen Harper pledges aid to Jordan as he steps foot in the country for the first time. This aid comes at a time Jordan is strained on resources and infrastructure due to an influx of more than 576,000 Syrian refugees fleeing their nation’s ongoing civil war. Canada is more than willing to help the nation as “Jordan has responded to the plight of Syrian civilians with unwavering compassion” declared Harper.
A sum of $105 million is to be spent on the country over a period of five years. $100 million will be dedicated to helping the Syrian refugees and 5 million to help alleviate threats posed by Syrian weapons. Earlier commitments include a sum of $110 million to help with Syrian refugees, $47.7 million for security related assistance and $203.5 million for international humanitarian assistance efforts in Syria and neighboring countries since January 2012. As school-aged children constitute 35 percent of the Syrian refugees, a considerable amount of $4.7 million will be pumped into their basic education.
During his visit, Stephen Harper was able to meet with Jordan’s King Abdullah and Prime Minister Abdullah Ensour, who showed their utmost gratitude for Canada’s undying support while looking forward to greater challenges ahead. Harper wishes to visit the Za’atri refugee camp which shelters these refuges.
Canada’s assistance aims at helping both Syrians and Jordanians by delivering basic services, including education for all. This aid doesn’t only stop at Jordan but is extended to Palestine with a sum of $66million.
King Abdullah told Prime Minister Harper that “there are major challenges ahead of us in this region” and hopes that as brothers, they will continue to receive their support  and maintain their cooperation to overcome them and move forward.