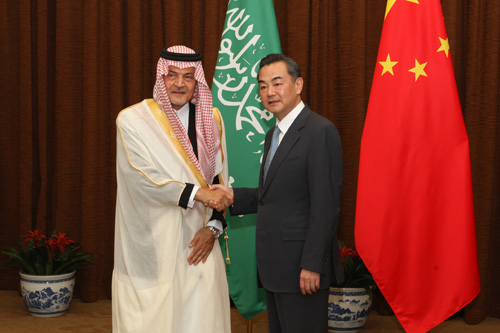 China’s foreign Minister Wang Yi has arrived in the Kingdom of Saudi Arabia to boost bilateral relations between the two countries and with the Gulf Cooperation Council (GCC). He held talks with his Saudi counterpart, Prince Saud al-Faisal, and with the Chief of the GCC, Abdullatif al-Zayani. Minister Wang has affirmed that China wants to increase its dealings with the Arab world.
Wang stated that his meeting with Saudi Foreign Minister centered on establishing deepen mutually-beneficial cooperation in different areas such as energy, trade, economy, and broaden cooperation in the new fields of nuclear energy and aerospace. He hailed the amount of trust and between them and their continued pragmatic cooperation. He described Saudi Arabia as a major developing nation in the Arab and Islamic world. 140 Chinese companies have invested in Saudi Arabia in different sectors with projects worth more than $18 billion.
The Saudi Arabian Minister said they are good friends with China. Minister Al-Faisal wants them to join their efforts in order to play a more active role in the international scene.
Minister Wang also met with Chief Abdullatif al-Zayani of the GCC to discuss matters related to the Middle East, and to enhance coordination within the United Nations, the Group of Twenty and othermultilateral organizations. China is seeking to “expand economic, trade and investment relations” with the organization in order to establish “strategic cooperation and relations with the GCC,” said Minster Wang.
After the meeting, a released statement from the GCC stated they are interested in “bolstering friendship and cooperation ties with China.”
China wants to intensify its ties with countries in the Middle East and North Africa. Foreign Minister Wang has been touring the region. He has already visited Palestine, Israel, Algeria and Morocco.