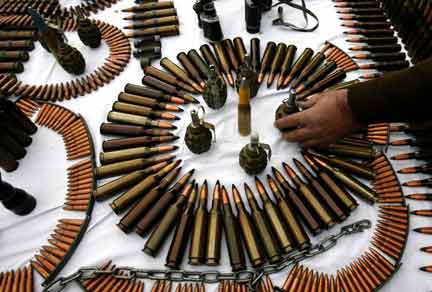 Canada has surfaced as one of the major countries active in providing arms to countries with unimpressive human rights records or a history of violent internal conflict. Countries in the Middle East and North Africa have become customers with trade in arms and ammunition reaching a 100% explosion. Canada’s arms trade is legal and regulated.
Bahrain, Algeria and Iraq, Egypt have lately became their customers. According to The Canadian Press, from 2011 to 2012, exportations have grown by 100% except got Egypt which is at 83%. The report shows that countries in the region continue to massively spend on arms and ammunitions. In the past 3 years, the region has been relatively unstable.
The analysis examined 10 years of Industry Canada data on a class of exports that is made up of military weapons, guns and ammunition, along with howitzers, mortars, flame throwers, grenades and torpedoes. It does not include other big military equipment such as vehicles, aircraft and other advanced technology.
Bahrain and Algeria are often criticized for human rights abuses while Iraq has been in a permanent state of insecurity since its Invasion by the US and allies in 2003. The Canadian Ministry of Foreign Affairs said they ensure that their weapons “do not contribute to national or regional conflicts or instability” or “are not used to commit human rights violations”.
Walter Dorn, the chair of international affairs studies at the Canadian Forces College, fears that exportations to the region could increase if the US dollar remains “the predominant motivator in trade deals”.
The report could raise surveillance between neighbors. Canada’s sales to Bahrain rose from zero in 2011 to $250,000 in 2012, while Algeria increased from $29 to $242,000 that same year.