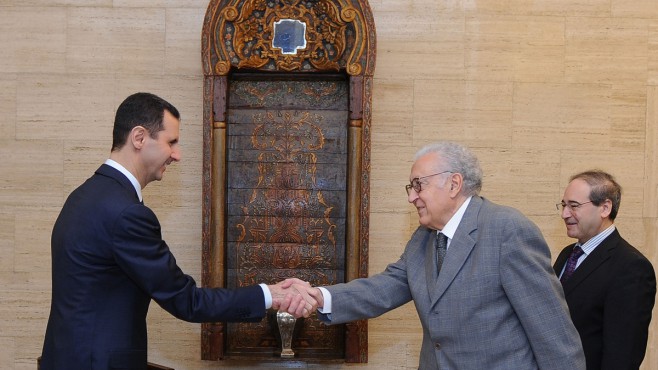 President Assad has outlined certain terms necessary to achieve a political solution to the Syrian war. He was speaking with the Lakhdar Brahimi, joint envoy of the Arab league and the UN, in Damascus when he made these remarks. Efforts to end the 2 year crisis which started with protests before turning into a war have remained fruitless. The war is going international and regional countries are concerned about the developments.
Assad stated that support to the rebels should cease in any situation wherein there is a wish for a “political solution to be successful.” He claimed that the foreign support facilitates the continuation of the war before reminding the international community that Syrians are solely “entitled to draw the future of Syria.” He stressed that “any solution must be approved by them and reflect their wishes away from any foreign intervention.”
Arab and European countries support rebels fighting government forces. They are demanding that Assad should leave power to end the country’s war which has forced millions to exile. However, the countries are faced with the difficulty of uniting the rebels because there are more than a dozen groups. The rebel groups also criticize the opposition political parties as opportunist.
A political solution is deemed the utmost mean of ending the war. The government has vowed that it will only discuss with unarmed groups while the rebels and the opposition remain heavily decided on the issue.
The government and the opposition are expected to meet in Geneva to discuss on a possible agreement to end the war but signs of failures have started to manifest before it begins. The opposition is in disarray over those who should represent the anti-Assad group.
The date is yet to be fixed for the meeting.