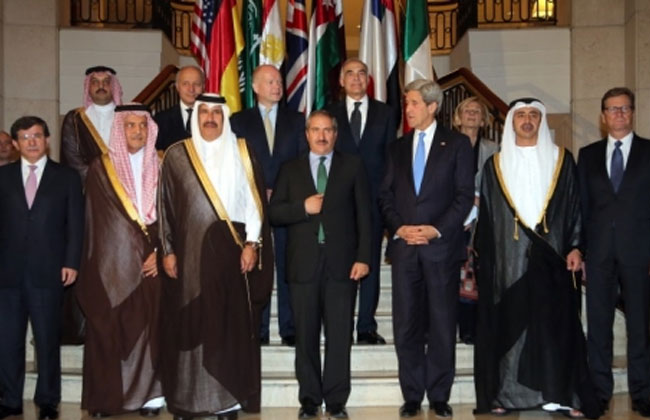 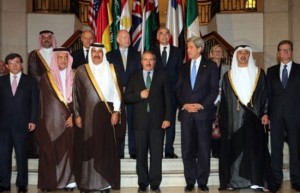 The conference on the friends of Syria in Amman, Jordan, has begun with delegates from several countries in a meeting aimed at forming “a transitional government with full executive authority, formed on the basis of mutual consent,” according to the British Foreign Secretary William Hague. The meeting is however expected to be dominated by the upcoming peace talks proposed by the U.S and Russia.
Members of the Friends of Syria want an end to Bashar Assad’s regime and have therefore been supporting the rebel groups. At the opening ceremony of the meeting, Jordan’s foreign minister, Nasser Judeh, said the talks were needed in order to pave a way for a transition and cited that more than a 100,000 Syrians are now displaced as victims of war.
The United States Secretary of State John Kerry blamed the pro-government forces for escalation of violence and urged for an end to it through a political solution. During a press conference with foreign minister Judeh, he said “we would call on President Assad to make the same commitment to find peace in his country.”
Both the U.S and Britain claim that support is being offered by Iran to fuel the situation and militant groups such as Hezbollah are fighting on the side of the government. Although the United States said it could increase its support to the Syrian opposition if a political solution with Assad fails, Britain reiterated that it has been “the longstanding view of the U.K. that Assad needs to go.”
The conference has been discredited by the Syrian Ambassador to Jordan, Bahjat Suleiman, as a meeting of pro U.S-Israeli campaign to destroy Syria and tagged Arab nations at the meeting as contributors to an “aggressive, terrorist war, on behalf of Israel, to destroy Syria.”