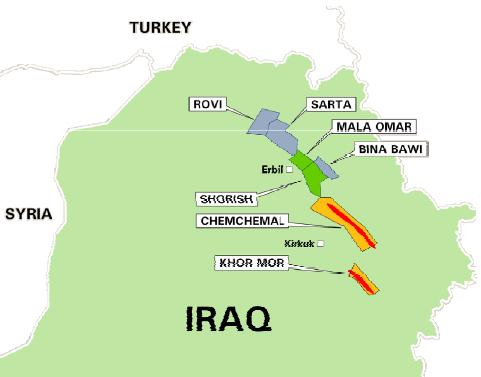 The Kurdistan region of Iraq, Bina Bawi, has attracted an Austrian Oil company, OMV, which is also partly owned by the Abu Dhabi government, holding 24.9% stake. This company is already pumping gas in this region and it has set its eyes to further widen their business operating to pumping oil as well.
OMV sights this region as a potential for vast growth and development. The Company announced yesterday that the drilling for oil is already underway and it has hopes for pumping up to 5000 barrels per day. This figure is expected to rise to up to 10000 barrels per day upon the completion of the other two oil wells that are going under construction.
Nonetheless; the easy promise of gallons of Oil is weakened by the dispute between the Kurd and the central government that refuses to grant Kurdistan independent exploitation of the region oil wells. As a result, Baghdad has taken some drastic measures as far as withholding sums of money that was owed to international companies. The central government has put Erbil in its blacklist and any operation by this Kurd Company is termed illegal. Despite the dangers that are clearly sighted, other oil companies like Total, ExxonMobil and Chevron have signed deals with the Kurds and it may be a big loss to them if they are to be expelled.
The strict policy laid down by the Central government has brought little or nothing to the companies that have invested in this rich oil region. The Kurdistan Regional Government is now in talks with the Turkish government concerning the possible investment of the Turks to pump oil and gas. The Kurds hope to be able to export independently to safeguard their position of producers in that region.