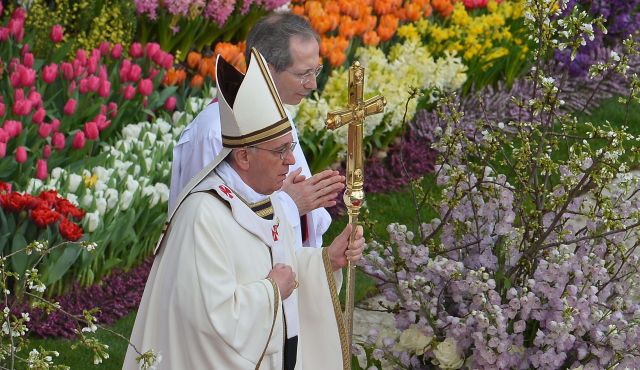 Estimations show that the Christian population is diminishing greatly in the Middle East mainly due to emigration since most of them leave for a more secure life abroad. With the growing Muslim majorities Christians seem to feel uncomfortable and some prefer to build new lives elsewhere. However those who remained in the region didn’t forget to invade churches to celebrate Easter Sunday. Although the Orthodox Christians who follow the Julian calendar will celebrate it on May 5 and the Roman Catholics and Protestant Christians celebrated it on Sunday.
This Easter is also particular in their eyes since it is the first one since Pope Francis was elected in Rome and many of them hope that this leader will allow the strengthening of their community that they feel is under siege by the Muslim society they live in. Actually in his first Easter Sunday speech to the world, the Pope made a plea especially in this region where so many are suffering.  As all the two popes before him he also talked about the Israeli-Palestinian conflict that he believes “has lasted all too long.”  The celebration was allowed in most regions thanks to the construction of concrete blast walls a tight security cordon in some churches like in Baghdad where in the past Christians have been attacked.
In the city of Jerusalem that is holy to all monotheist religions, Catholics held mass in the Church of Holy Sepulcher where it is believed Jesus Christ was crucified.  Amongst the worshippers were also many foreign visitors since this year Easter coincided with the Jewish festival of Passover which will according to Israel’s tourism ministry  bring some thousands of visitors  during this week making the time of the year the busiest for tourism in the country.