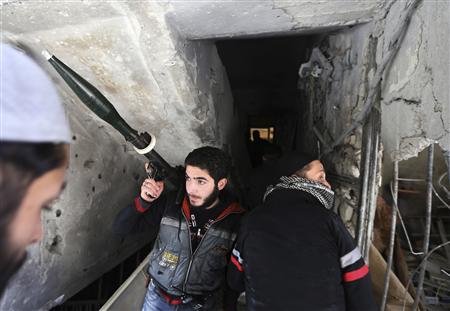 It has been established that this year’s Arab summit will be held in Qatar’s capital Doha but before its opening issues related to Syria’s representation are concerning many. Since Syria has launched an army to stop rebels and refused a peace proposition that was made to them by Arabic countries no representation has been present in Arab League meetings.
According to a coalition led by Qatar during this summit Syria should be represented by the actual government opposition members called the National Council. However some other countries that are member of this League refuse such decision based on the fact that it “lacks of clarity”. Amongst those resisting are Algeria and Iraq that tried to delay the agreement to let Syrian opposition be present at this summit.
In order to resolve this issue the National Council leader Muath Al Khatib decided to resign in order to be freer in his actions. This allowed him to arrive in Doha with a delegation composed of eight Syrians including the actual provisional prime minister and he was welcomed by Qatar’s Crown Prince Tamim Bin Hamad Al Thani to be part of this summit that has as a slogan “The Arab Nation—Current Situation and Future Perspective”. This news was not well taken by Syria’s actual leaders that believe that the country’s seat has been stolen from them.
Actually an official daily Al Thawra clearly stated that the power of a country should be given by the people and not emirs of Qatar and Saudi Arabia. Despite this harsh reaction, Muath Al Khatib whose resignation has not been accepted by the National Council is going to make a speech and then try to convince Arab countries how necessary it is to arm rebels even though Europeans are not willing to do so.