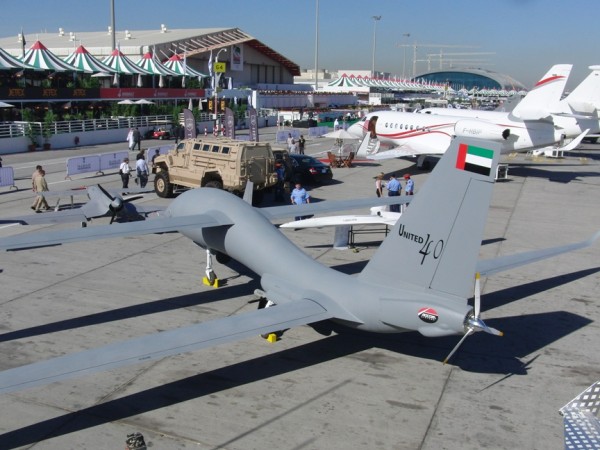 United Arab Emirates Company, ADCOM Systems, a major manufacturer of Unmanned Aerial Vehicles (UAV), has successfully completed the first test flights of its drone dubbed “Yabhon United 40 – Block 5”
The drone, which has been unveiled lately at the Abu Dhabi International Defense Exhibition, can carry up to 10 precision-guided missiles with a range of 60 kilometers. It can also fly over 100 hours without refueling at a 30,000ft altitude. It has twin engines, six fly control units and over 400 channels of communications.
Its ultra-long endurance comes from its glider-like, high aspect ratio wings. With its futuristic aero-dynamics, “Yabhon United 40 – Block 5” is the first drone in the world to hunt UAVs. Equipped with a high-tech auto-tracking system, the drone, which can take off with a maximum weight of 2000 Kg, is capable of downloading video to the user, engage automatically and destroy a target.
The drone manufacturer said it has already received orders from countries of the region for the purchase of the UAV. The company also specializes in air traffic control radar systems (ATCRS) and advanced communication systems. It was founded 20 years ago and gathers more than 20 leading companies in the region.
While the UAE and other countries of the region are trying to develop the technology and the industry of UAV to meet their own needs, industrial countries and superpowers are currently working on the next generation of unmanned combat aircraft which will be able to fly faster than the speed of sound and cannot be detected by radar.
According to defense experts, these new kinds of robotic planes would also be able to fly intercontinental missions and automatically evade incoming missiles, reducing hence the need to risk human lives on long, dangerous operations.
Unmanned aerial vehicles are now seen as a robotic aircraft that can fly further, faster and higher than is currently possible with human pilots, who can grow tired or blackout in maneuvers that produce high G-forces.
But the use of drones is criticized by human rights groups, who claim their use as weapons violates international laws as often innocent targets can be killed. Furthermore, as drones are made more and more autonomous, there is always a risk that these flying machines might, one day, go out of control and subsequently make life or death decisions.