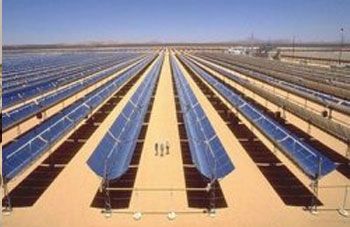 Prior to the beginning of the first Forum on sustainable partnership in renewable and energy efficiency between the United Kingdom(UK) and Algeria, Foreign Office Minister for the   Middle East and North Africa Alistair Burt described their relations to “have never been so good than today.”

The forum which began on Monday is aimed at strengthening their relationship and outline the opportunities offered in the different sectors to further enhance their cooperation in the energy field and to develop Algeria’s capability in developing an effective regulatory framework and attractive investment environment for renewable energy and energy efficiency projects.

The forum was an occasion which brought together different stakeholders from the two countries to share their experiences. The British participants showcased their “expertise” in refuse disposal, energy efficiency and solar energy. The forum was also marked as an event which will show UK’s commitment to support Algeria in developing its ambitious renewable energy programme and could lead to the beginning of a wider cooperation in this area. Minister Burt, speaking on the sidelines of the conference, said that the “UK seeks to broaden its energy cooperation with Algeria, which was devoted only to gas and oil, to include renewable energy.”

Algeria is poised to invest around $60 billion to produce 22GW derived from solar, wind and geothermal sources. 17 years from now, renewable energy will be accounting for 40% of Algeria’s local electricity production.

The two countries have agreed to share their know-how as part of Algeria’s national program for renewable energy development through a “partnership based on mutual support.”

The program is being led by Algeria’s Renewable Energy Development Programme (REDP) which aims to meet the country’s growing domestic demand and to preserve fossil resources to free up gas for export.