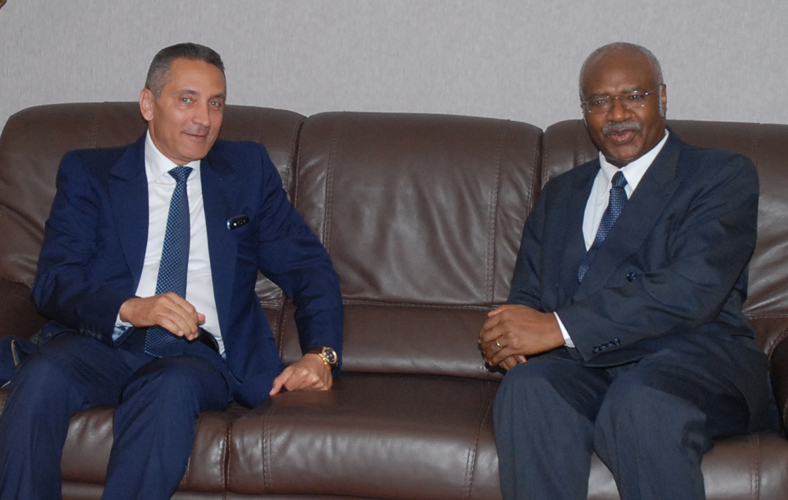 Saham Group, one of the largest Moroccan companies operating in the sectors of insurance, health plans, roadside assistance, and other sectors, looks determined to expand its presence in Africa, two years after buying the second largest continental insurer, Ivory-coast based Colina Group, and one year after buying Lebanon’s second largest insurance company Lia.
It this context, economic observers are intrigued by the visit paid by Moroccan Tycoon Moulay Hafid Elalamy, founder and CEO of Saham, to the prime minister of the Government of Cameroon, Philemon Yang, officially to discuss on Saham’s investment plans in Cameroon in the insurance sector and in other sectors.
Saham group which already runs four enterprises in Cameroon, including Colina Cameroon and Colina Life Cameroon, is present in 15 other African countries where it is seen as one of the most performing companies operating in insurance, off-shoring and medical assistance.
Moulay Hafid Elalamy, who is visiting Cameroon to participate in the 37th General Assembly meeting of the Federation of African Insurance Companies (FANAF), told the media after the meeting that he briefed the Cameroonian official on his group’s experience in Africa and on its expansion plans throughout the continent in its fields of predilection, mainly car and life insurance, health insurance as well as real estate.
The meeting, he said, focused on Saham group’s activities in Cameroon and how the group is planning to expand these activities and to conquer other sectors.
The FANAF 37th General assembly, convened in Yaoundé this February 25-28 on the topic of “Insurance and Social risk,” is attended by over 600 delegates.
Debates are centering on ways to improve the existing institutional measures to respond to accidents and disasters, how to make the compensation systems equitable and fast and how to upgrade the structuring of the insurance system.
Participants are also discussing means of instituting a system of universal medical coverage, and the possibility to set up a Guarantee Fund for Automobile to cover insurance in this sector.
Other items on the meeting agenda include the evolution of investment in Africa, challenges and opportunities for the development of an enterprise in Africa, the role of private insurance in universal medical coverage mechanisms, the social responsibility of insurance companies, the coverage of natural disasters, and more generally how to use insurance to generate wealth, stimulate development and fight poverty in Africa.
Moulay Hafid Elalamy, listed by Forbes as one of Africa’s 40 wealthiest, started his career in a Canadian insurance company, in 1981, after he graduated from University Of Sherbrooke in Quebec with a degree in information systems.
After he acquired enough professional experience, he returned to his native Morocco and worked in a local insurance company where he quickly moved up the executive ladder.
In 1995, he formed his own Saham Group which has since continuously expanded and diversified its activities. In 2011, the group’s revenues stood at about $800 million.