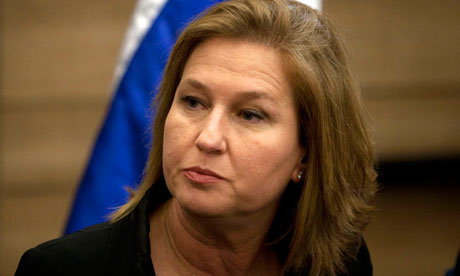 For a few days the whole of Israel has been eagerly awaiting to find out who exactly is going to be the members of the coalition government formed by Binyamin Netanyahu. On Tuesday, the first member of this coalition was named: Livni leader of the Hatnuah party was appointed as justice minister.
During her mandate she is expected to make negotiations towards a peace settlement with the Palestinians advance forward. This nomination is the sign according to Netanyahu that this new government is committed in reviving the collapsed peace process. If Livni succeeds in her mission it will allow the withdrawal of Israel from the West Bank.
However these two politicians seem to have formed an alliance that was not expected to see the day. Since in 2009, Livni had reused the opportunity to share the role of prime minister with Netanyahu. At the time the reason she gave was that he didn’t offer enough commitment to engage in the peace process for which she has dedicated her political life.
Afterwards, she decided to retire from the political arena and the only reason she decided to come back according to her in politics is “to fight for peace.” However the fact that she mainly concerned on foreign issues coast her elections since most Israelis are concerned with domestic affairs. That is why she only got six seats at the parliament.
But thanks to the new position she was given she will be a member of the security cabinet and lead a team of specialized staff in negotiations. The only condition that she has to obey to is that the prime minister and the Knesset will have the final word in any potential deal that is to be made towards the peace agreement.