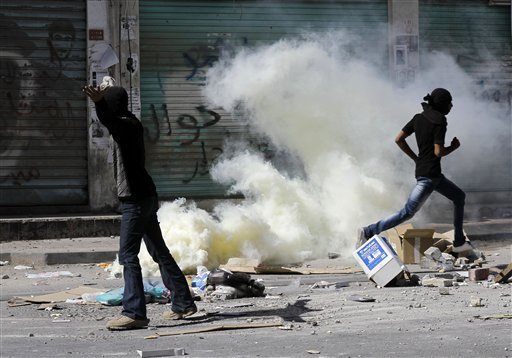 Demonstrations were held all over Bahrain to mark the second anniversary of the uprising that occurred in the country. However during this event many were injured and a teenage boy was even killed. At his funeral clashes broke out between the mourners and police forces that did not hesitate to fire tear gas and stun grenades. This young boy called Hussein Al Jazeeri was shot during what was supposed to be a peaceful protest to commemorate the day.
According to opposition groups it is the government that started the beginning of violence during the march.  But the authorities do not accept the claim and blame the opposition of having pushed demonstrators to be violent. They also accuse them of being responsible for the death of a policeman that was just trying to calm things down. When the death of the young  boy occurred the government warned the opposition not to use this “for political purposes or as excuse to engage in criminal or riotous behavior.” Thus when thousands tried to attend Al Jazeeri’s funeral in the Shiite village of Daih near the capital Manam security forces tried blocking access of the village which led to the clash that forced the police to use a force and many casualties were made on both sides.
This turmoil in the country comes at a very bad time since the political future is still unsure and the stability seems to be fragile. Because of many rising tensions and declining economy it was urgent to start negotiations.
Even though talks were initiated just a week ago between the government and opposition groups it is unclear on how the event that occurred during the funeral will affect the discussions that are to be continued on Wednesday.