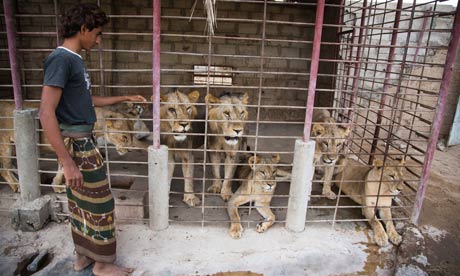 An increase of demand in exotic animals from rich Gulf States gave the idea to Yemen’s poorest region to start breeding Lions imported from Africa.
This new type of merchandise that has become suddenly profitable is mostly found in the remote Tihama plain.
The locals buy cubs and raise them and when lionesses get pregnant they sell the new born cubs to individuals who are ready to spend up to $14,000 a piece. Lions are not the only animals that are illegally sold in the region: cheetahs, leopards, gazelles, hyenas and even monkeys are traded. Most of the animals will end up in private collections of the wealthy in Saudi Arabia, Qatar and the Emirates.
The business is becoming more and more lucrative as the prosecution risk is very low in view of the remoteness of the Tihama region, commented the director of Born Free Foundation, a project located in Ethiopia, wherefrom most animals smuggled in Yemen come. He also said that this smuggling is related to the other “cross-border criminal activities” such as shipment of guns, drugs and people.
The breeders know very well that their business is forbidden by the law but for them this is not really a crime, according to David Stanton, head of an NGO dedicated to protecting Arabian leopards in Yemen. He said that almost 60 to 70 percent of animals trafficked in the region die during transit. What the smugglers do not understand is that if the animals’ death is a mere economical loss for them, it seriously puts at stake some species that are ranked as endangered species, he deplored.
Some commentators warn that this kind of trade is channelling money into a region where lawlessness and security issues are a serious concern to the whole world.