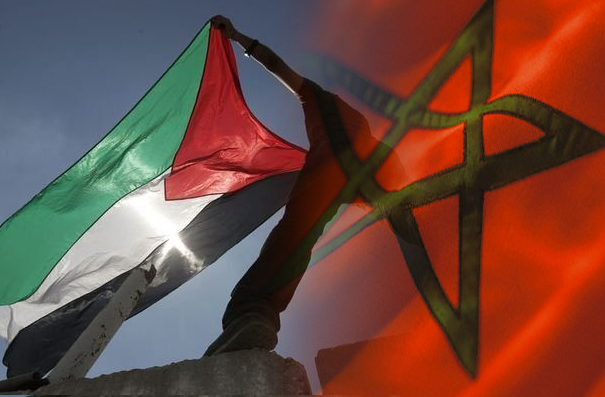 The King of Morocco underscored that his country’s support to the Palestinian cause stems from ” a natural and steadfast commitment” on the part of the North African country which has always backed and will always back all Palestinians and which has always been and remains committed to their prosperity, concord and reconciliation.
King Mohammed VI renewed Morocco’s unflinching backing to the Palestinian cause during a phone call he received on Wednesday from the President of the Palestinian Authority, Mahmoud Abbas.
During their exchange, the two leaders talked about the forthcoming meeting of the Al-Quds Committee scheduled to be convened in Morocco in the coming weeks.
The Al-Quds Committee, an offshoot of the Organization of Islamic Cooperation (OIC), is chaired by King Mohammed VI and works to defend and safeguard the Arab and Islamic identity of East Jerusalem that was annexed by Israel in 1967 and to preserve all holy shrines in the city.
In his capacity as chairman of this committee, the King of Morocco approached, on many occasions, the international community and mainly the Security Council permanent members and the European Union, urging them to shoulder their responsibility with regard to this holy city and to the need to preserve its status as it is universally accepted.
Morocco has, at all times, extended an unwavering and unconditional backing to the Palestinian cause, provided assistance to alleviate the suffering of the Palestinians whose land has been spoliated and vigorously defends, mainly at the United Nations and other international forums, the legitimate right of the Palestinian people to establish their independent state with Jerusalem as its capital, and to live in peace with all their neighbors.
In his phone talks with the King, President Mahmoud Abbas has also lauded Morocco’s action in favor of the Palestinian reconciliation as evidenced by the Inter-Palestinian dialog meeting held mid-January in Morocco. The meeting, attended by different Palestinian Factions, was convened at the invitation of Morocco in an effort to restore Palestinians’ unity and thus consolidate their position in any peace talks.
The President of the Palestinian Authority requested in this regard that King Mohammed VI pursues his mediation efforts between Palestinian factions and sponsors other inter-Palestinian dialogue meetings.