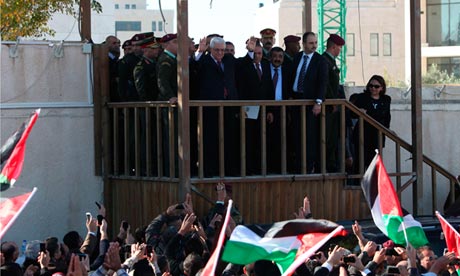 When Palestine was granted the status of non member observer state at the United Nations in November, Israel decided to withhold the tax and customs duties collected for the Palestinians and that are normally transferred to the Palestinian Authority on a monthly basis.
Israel explained then that it was seizing the funds because the Palestinians didn’t pay the Israeli Electricity Corporation a bill of about $200m.
The new fund freezing move, described as “Israeli piracy” or “Israeli sanctions”, dealt a blow to the Palestinian economy and population. As an instance of the deepening financial crisis, some 150,000 civil servants had their pays suspended or received only part of their salaries. Hundreds of employees took to the street to protest the situation.
The tax withholding measure was harshly criticized by the international community. However, it was only after the recent elections that brought to the Israeli Parliament more deputies from centrist parties, and after a meeting Tuesday with former British Prime Minister Tony Blair- the representative of the international Middle East Quartet formed by the United Nations, the United States, the European Union and Russia- that Israel’s Prime Minister Benjamin Netanyahu decided to release the funds collected last December.
His spokesman said the transfer of December taxes, amounting to $100 Million, was a one-time move and that no decision had been made as to future transfers.
This means that Israel will continue using this strategy as a means of leverage in the future, in violation of the two-decade old interim peace arrangements implying that Israel would transfer to the Palestinian Authority the $100m tax and customs duties it collects every month and that constitute about two-thirds of the Palestinian Authority’s domestic revenue.
Palestinian officials said that the $100 m to be transferred by Israel are not enough to enable the PA cope with the financial crisis, while others criticized the attitude of the Israeli government which is acting, they said, as if it is assisting the PA “It is an insult that adds to injury because the Israelis have harmed the livelihood of over one million Palestinians,” a Palestinian official said.
Many Palestinians were forced to shut down their businesses and trade unions called for strikes that crippled public transport and closed schools.
According to the Palestinian Prime Minister, Salam Fayyad, foreign aid helps Palestine to survive but the amounts received have dropped from $1.8 billion in 2008 to about $600m last year.