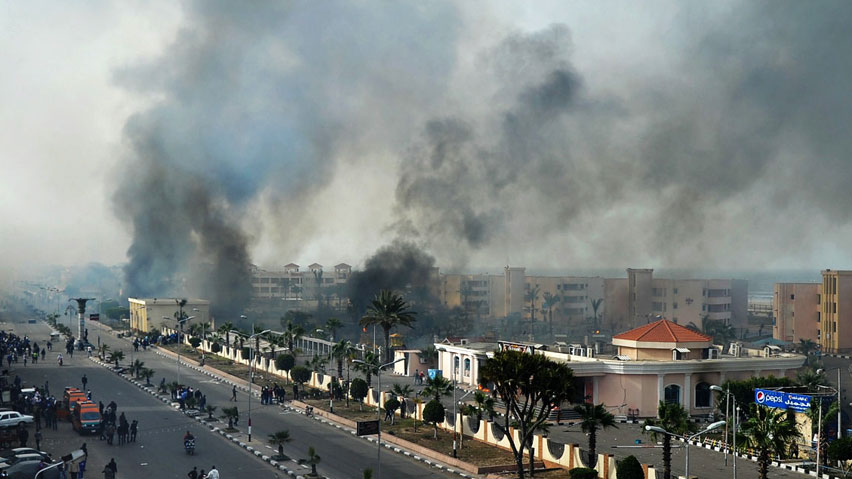 Egyptian President Mohammed Mursi has declared a state of emergency and imposed a curfew in the cities of Port Said, Suez and Ismalia after four days of violent unrest and growing deadly riots, threatening the country’s stability.
Nearly 40 people died and more than 630 were injured in Port Said in clashes triggered by a court ruling that sentenced to death 21 people accused of murdering 74 Ahly fans following a soccer match in February 2012 between the clubs of al-Masry and al-Ahly. It was the largest death toll in Egypt’s soccer history. Most people died of concussion, cuts and suffocation in the stadium when fans of Port Said attacked visiting supporters from Cairo club of al-Ahly.
As soon as the court judgment was announced, angry relatives of the sentenced defendants in these tragic events stormed the prison where their sons were detained while other mobs attacked the East Port Said police station, traffic control stations and set fire to another police station. Egyptian troops have been deployed in the hotspots in an attempt to restore order.
This new wave of violence coincided with the commemorations marking 25 January revolution that ousted Hosni Mubarak regime. In a move to appease mounting tensions and frictions, Mr. Mursi addressed the turbulent and boiling Nation, saying that “for the sake of Egypt” he declared a limited state of emergency in the three cities.
“I am against any emergency measures but if I must stop bloodshed and protect the people, then I will act,” he said, stressing that he might take further actions if necessary.
According to some analysts, the Islamist president thinks that by adopting a hard-line he can restore calm in a new Egypt still looking out for democracy after years of autocracy. No doubts, Mursi’s handling of this high risk situation combined with socioeconomic woes presents a new challenge to his leadership and provides him an opportunity to prove his statesmanship.