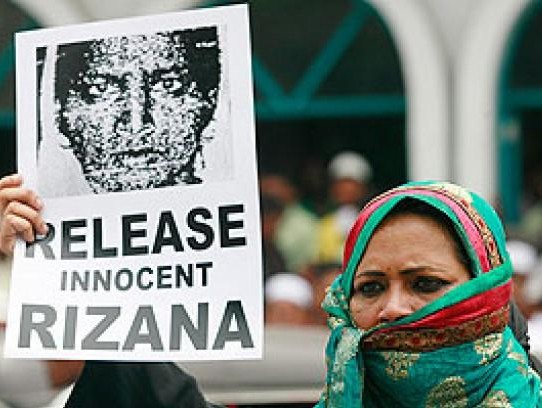 The Kingdom of Saudi Arabia is the destination of thousands of migrants from any south Asian countries that come looking for employment. They manage to get most of the time jobs that the citizens don’t want and from which they can earn better salaries than in a similar position in their own country. However, many of them are abused by their employers amongst them a maid from Sri Lankan, Rizana Nafeek, was accused of having killed a four-month-old baby that she looked after. At the time she was underage and was brought in with false documents to work as a domestic assistant in a Saudi family. However a few months later her employers’ baby was found dead in a mysterious manner she was jailed and was sentenced to death despite the fact that she was a minor.
Since 2005, many campaign groups have tried to show the world the injustice of her condemnation. To begin with, they believe that she is “a victim of flaws in the KSA judicial system.” The fact that she had no lawyer and no competent translator during her trial is something that choked the south Asia Human Rights Watch. In addition, the police report claimed she initially “confessed” to the murder but afterwards she retracted her statement saying that she was under abused physically and that the baby died from choking when drinking from a bottle. Sri Lanka’s president Mahinda Rajapaksa has tried to raise the young girl’s case with Saudi Authorities but each time they showed that even a diplomatic incident with these Asian countries is not something they fear risking. That is why on Wednesday after seven years in death row, Nafeek was executed in this country which is one of the three only countries that execute death sentence to those accused when they were minors.