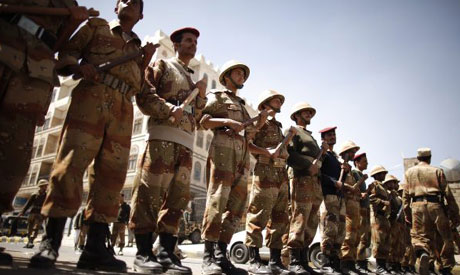 The actual security crisis in Yemen is a subject that the government has promised to tackle and try to stabilize this year. As part of the resolution of the problem the Yemeni authority decided to organize a three-day campaign to stop the hit-and-run shootings with vehicles that were responsible for the death of more than 40 security officiers and four civilians just the previous year. That is why for three days 103 police patrols were mobilized in Sanaa where checkpoints were set all over the capital in order to control the vehicles that are illegally used. In addition passers were searched randomly to cease any unlicensed weapons they might be carrying knowing that in this country firearms are part of the culture. After a very thorough campaign the interior ministry report said that 500 illegal motorbikes were stopped as well as 72 cars without number plates. The report also stated that some of the transportations might have been actually used I assassinations. In addition, many weapons like Kalashniokovs as well as heavy firearms were confiscated during the operations. According to Abdelrahman Hanash, a high-ranking interior ministry official, these vehicles and especially motorbikes have becoming tools that extremist groups frequently use in order to attack the government security.  Accoding to the ministry official the unrest Yemen had to witness for the past few months was a favorable period for terrorist groups to strengthen their attack plans. That was why the country had to witness a series of hit-and-run assassinations that the countries security could not handle since more than 200,000 motorbikes are being used on a daily basis across Yemen and since most of them are unregistered it makes it difficult to the police force to resolve the crimes by putting the murders behind bars.