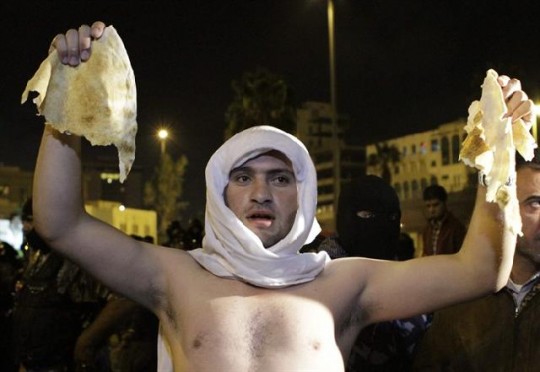 Jordan was facing a $3 billion deficit in September. Therefore, the government tried to reduce fuel subsidies by raising the price by 10 %. But the decision was reversed when thousands demonstrated. However, a drop in subsidies forced the cabinet to announce late Tuesday night an increase in prices of 14 %  at the pump and 50 % for gas used in cooking. This has lead to a general strike on Wednesday across the kingdom. In many cities, tires were burnt, traffic lights smashed and roads blocked. In the capital, two cars were destroyed right in front of the minister’s home. Similar chants that were chanted during the Arab Spring were shouted throughout constantly. According to a member of the Muslim’s Brotherhood (Jordan’s leading opposition force) Murad Adailah this “anger and frustration” is the result of discontent over the struggling rule of King Abdullah. In just a year, the king dissolved the parliament many times and named it’s forth prime minister in October. At the same time he has to face activists that wish to change the constitution and overthrow the monarchy. Citizens demanding more freedom are also another element that concerns greatly. Most of those who criticize the government’s actions are put in prison with charges that can lead them to death penalty. The rise of fuel price just made the peak of tension reach a whole new level. It even succeeded into unifying the population of 6 million that is divided between refugees and natives fro Palestine, Syria and even Iraq. Opposing parties even joined forces to have a greater impact. Zaki Bani Irsheid, vice chairman of the Muslim Brotherhood said that they have made alliances with Salafists, and a large protest movement known as the Hirak.